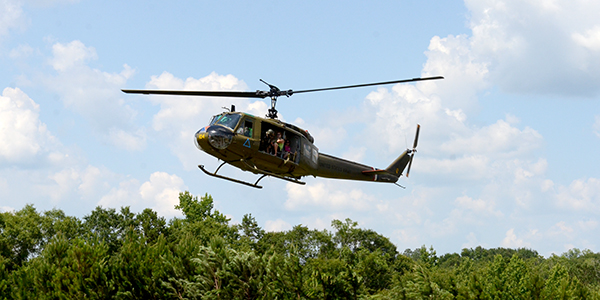 The Huey helicopter comes in to land, bringing back a group of passengers Saturday afternoon.
MESSENGER PHOTO/SCOTTIE BROWN 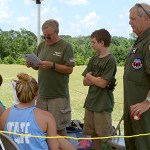 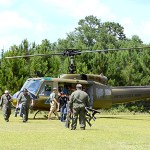 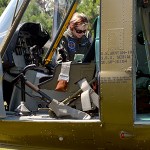 Army Aviation Heritage Foundation member Patty Meek checks out the helicopter before a group takes a ride in the helicopter. MESSENGER PHOTO/SCOTTIE BROWN 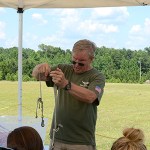 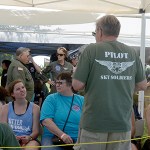 Tim Daniels wanted just one more ride in the Huey on Saturday.

Daniels, a retired ASF air mechanic, was one of more than 30 people who came to Camp Butter and Egg on Saturday for the Wiregrass Chapter of the Army Aviation Heritage Foundation’s event.

“The Army phased the Hueys out a few years ago and that was a really sad time on Ft. Rucker,” Daniels said. “I just wanted to ride in another one. Being in the air, it’s peace. You’re above all the crap that’s going on down here. It’s much cooler up there, too. You get out of ground effect and the air gets cooler. If you get it up to 3,000 feet with the doors slid open it’s like air conditioning free of charge.”

Army Aviation Heritage Foundation prides itself on reaching out to veterans and providing them and their families closure by giving rides in Vietnam-war era Hueys and other helicopters.

Patty Meek, retired Army Chief Warrant Officer 4, said the foundation was created almost 20 years ago with the primary objective or reaching out to forgotten veterans.

“Our main goal was to try to reunite the veterans with the American public,” Meek said. “It’s also an educational process because we do all the maintenance on all the aircraft, so we bring students in to help out. We help them to see if it would be a career that they would want to do. We talk to a lot of veterans and their families and when they get to go for a ride on the aircraft, that’s helped them a lot.”

And, in one case, one of the veterans discovered the pilot was the same pilot who had rescued him in Vietnam. “The pilots would write it on the back of their helmets who they were, and the guy found out he rescued him,” Meek said. “It’s just a good memory for them, and of course the guys always thank them for doing this for them. It’s an experience for all of us.”

Ryan Gibbons, a Butter and Egg Adventures staff member, also had the chance to take a flight in the Huey and said it was an experience he won’t soon forget.

“It was amazing,” Gibbons said. “I can definitely see why there is a rush with it. It’s a great way to see everything and all the land. You can see how the military uses it tactically because it’s such a different few. It’s amazing. I had a blast. “

Meek said the organization thrives on the rewards of helping the veterans who attend events such as this one. “It’s a lot of work, but at the end of the day it’s the satisfaction that you get from helping these people connect and bring some closure to them,” Meek said. “If that’s something we can do then it was worth it, and we’ll do it another day. We’re all volunteers, so if it was something that wasn’t good or something we didn’t like we wouldn’t be out here doing it.”

Summer means no school, and no school sometimes means a lack of access to healthy meals. Research shows that children... read more