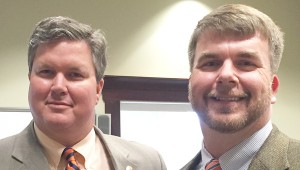 The Troy City Schools Board of Education approved the hire of a new principal at Charles Henderson High School on Thursday as well as the resignation of its assistant principal.

“We’re fortunate to get someone as high quality as Brent Harrison,” said Dr. Lee Hicks, superintendent of Troy City Schools. “We had some big shoes to fill with Dr. English leaving, but in going through the application process and interviews, our committee felt like Mr. Harrison brought a high energy level, a strong knowledge base and the experience of having worked in a larger school system where he focused on discipline, AP program implementation and extracurriculars.”

Harrison comes to CHHS from Enterprise High School, where for the past four years he has served as one of five assistant principals at the 2,300-student school. His area of emphasis was school safety and major discipline.

“I’m very excited and very humbled by everything,” said Harrison, who was joined at the meeting Thursday by his wife, Kelly, and children Boone, 4, and Trosper, 1 month. “I’m excited to becoming into a town I’m familiar with and people I’m familiar with … I’ve been looking for the right opportunity.”

Harrison, who is a native of Dothan and a graduate of Enterprise High School, graduated from Troy University in 2001. While there, he played football for then Coach Larry Blakeney and met Hicks, who was a graduate assistant with the team.

“He was a leader then and is a leader now,” Hicks said. “It’s been a pleasure to watch his career develop.”

“I’ve known of this school system,” Harrison said of Troy City Schools. “I’ve heard nothing but great things about Dr. Hicks and Dr. English and the school.”

In addition to Harrison’s hire, the school board approved the resignation of Carolyn Hampton, assistant principal at CHHS. Hampton has accepted a position as federal program coordinator with the Crenshaw County School System.

“Unfortunately we now have two assistant principal positions open in the system,” Hicks said. “We hope we’ll be able to fill those from within the system.”

Pell Avenue to reopen next week

After just over two months, Director of Environmental Services Vaughn Daniels said Pell Avenue should be open for through traffic... read more