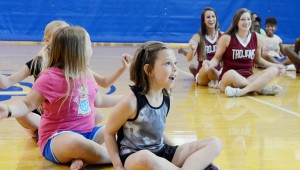 Messenger photo/Courtney Patterson
Troy University cheerleaders play Ships and Sailors with the campers at the Troy Parks and Recreation summer camp on the kick-off day Monday.

“We have taken advantage of this facility to offer day camps because of the variety in activity uses that we can offer,” said Dan Smith, director of Troy Parks and Recreation. “The children can go swimming, play basketball, do arts and crafts and they have a lot of learning and education sessions that are fun.”

Reeves encouraged the children to always be respectful and do everything safely.

“I don’t want anyone to get hurt,” Reeves said. “I guarantee that you can have fun and be respectful. It means a lot to have this facility to do things like this.”

The kids will gather each day for sports, board games, swimming, arts and crafts, but this is the first year that the kids will have the opportunity to learn Spanish.

“A lot of parents wanted their kids to have some education,” said Cheryl Pennington, administrative assistant with Troy Parks and Recreation. “This year we are doing something new; we are offering Spanish. Teachers are going to come in and teach them the basics in Spanish.”

Other certified teachers will also be coming in to help with the camp, Pennington said.

“The kids have something to do during the summer,” Pennington said. “We have them all day and they enjoy it.”

Camp coordinator Sasha Tuck said the summer camp would be a great opportunity for children of all ages.

“At the camp they get to meet new friends,” Tuck said. “It’s just a fun-filled summer. They are staying active for the summer. We are just making sure the kids are having a safe summer and are highly supervised.”

Smith echoed Tuck’s sentiments saying the camp was a great place for children to be this summer.

“I’m proud of my staff,” Smith said. “They do all the work and all the planning to make it a fun, creative and safe environment for all of the children.” 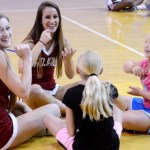 Messenger photo/Courtney Patterson Troy University cheerleaders play Ships and Sailors with the campers at the Troy Parks and Recreation summer camp on the kick-off day Monday. 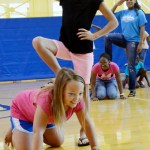 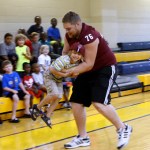 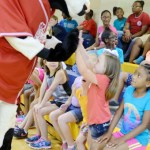 Messenger photo/Courtney Patterson The Chick-fil-A cow engages with the campers at Troy Parks and Recreation Monday during the kick-off. 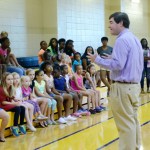 Messenger photo/Courtney Patterson Troy mayor Jason Reeves speaks to the campers Monday at Troy Parks and Recreation about being safe while still having a fun time.

WITH HONORS: PCHS Class of 2015 graduates, ready for future

The Pike County High Class of 2015 toss their caps after receiving their diplomas Friday in Sartain Hall at Troy... read more