This past Saturday marked a first for the City of Troy as it hosted the first Fifth Saturday event on the Downtown Square.

The event capitalized on the extra weekend of the month, and the city took the time to ensure the event would draw a crowd of all ages with good food, good music and good company.

For a first-time event, Fifth Saturday downtown on The Square could not have gone better, said Leigh Ann Windham with the City of Troy.

“I could not be any happier about our first Fifth Saturday event,” Windham said. “We had a fantastic turn out with people of all ages. Our restaurants did a great job with the food. We had a great variety of food items and our guests thoroughly enjoyed it.” 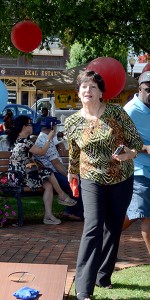 Messenger Photo/Scottie Brown
Kathy Sauer, president of the Pike County Chamber of Commerce tosses a bean bag during a game of cornhole at the fifth Saturday event of the Square.

“We want to thank the restaurants, the city and the people who went through the effort to make the event successful,” Sauer said. “Not only was there a large crowd there for the first time, the eating establishments and downtown merchants had an increase in traffic and retail. It was enjoyable in such a community atmosphere with young families, international students and a true blend of our community. I think it shows that we hit it right on the button. It was a much needed community event that we hope we can continue to build on.”

Windham said the open-mic event had gone just as well.

“Our live mic participants were awesome,” Windham said. “There was a lot of great talent in the gazebo Saturday, and, as always, Lenny Trawick did a wonderful job.”

Participants were allotted 12 minutes on stage from 3 to 5 p.m. Saturday, and Tanner Norris said the opportunity to perform for the Troy community had been one he was glad he took advantage of.

“I’m doing it just to try and get my foot in the door at Sips on The Square,” Norris said. “That’s the only place here in town that I have not played at. I want to be able to play everywhere I can. I play to whatever kind of crowd that I have. I do pretty much anything and seeing other people have fun is great. It’s a very blessed life that I have right now.”

Members of the Vine Church ran ladder ball and corn hole games and gave out balloons making the event family-friendly. Kyle Lemanski, who attended with his daughter Sydney, said he was thankful to be able to have an event to go to that was family-friendly.

“We just came out here to see what was going on around town and help out the local businesses,” Lemenski said. “It’s amazing just having a small town that actually cares and caters to the citizens. It makes you feel good. Sydney is having a blast. She loves the balloons, and she loves the music.”

Submitted photoCorey Albertson from Fort Rucker won Best in Alabama with his 1968 Chevy Camaro RS/SS. He is pictured with... read more