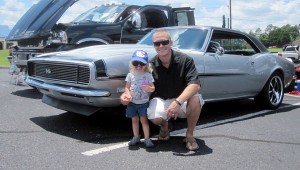 Submitted photo
Corey Albertson from Fort Rucker won Best in Alabama with his 1968 Chevy Camaro RS/SS. He is pictured with his daughter, Laila.

Among all of the “ooohs,” “aaaahs” and “oh, mans” there was one vehicle that got one “Wow!” after the other at the Annual Best in Alabama Car Show on Saturday.

James Hines of Daleville’s 2005 Ford-F-350 was a showstopper. Billed as T-Rex, the Ford truck’s transformations were mind-boggling – a tilt bed, title hood, semi wheels and tires, a super cab with a large flat screen TV and 28 train horns.

“The horns blow louder that a train whistle,” Hines said. “Just not as long.”

He had to constantly field questions, mainly, “Is it a dump truck?” The answer was, no. “Why?” To which Hines answered, “Why not?”

“Bad dreams happen,” he said. “This was one of those.”

Hines had the aircraft electronics background and the dream necessary to make T-Rex a reality and he enjoys and appreciates the attention his Ford truck gets.

All of the “cars” in the show would have a hefty price tag attached if they were for sale. Most of them were not.

Bobby Stewart of Midland City bought a 1979 Camaro for his son 14 years ago. His son didn’t want the car so Stewart, a mechanic, decided to see what he “could do with it.”

“My son wants it back now but I told him he’ll have to wait until I die,” Stewart said, laughing. “I’m like most people with these vintage cars, we like keeping history alive. We’re not looking to sell our cars.”

Neither is Jeff Adams of Springhill going to sell his 1970 Chevy Chevelle. His grandson, Tyler Fortune, is already thinking about going to the prom in that beauty.

“I bought the Chevelle in 2000 but didn’t have time to work on it until about two years ago,” Adams said. “The body styles are the same on the Chevelles from 1968 through 1972. The difference is the taillights. We enjoy riding the car. We get a lot of looks. I just like the older model cars. You can tell one of them from the other. You can’t do that with today’s cars.”

There were many makes and models at the Best of Alabama Car Show held at the parking lot of Park Memorial United Methodist Church Saturday.

Ron Taylor of Donaldsonville, Georgia said restoring classic vehicles is a rather expensive venture but he bought and restored a vehicle like the first car he and his wife ever owned.

“And, she’s never grumbled about one penny I’ve spent on it,” he said, with a smile and added that a lot of pennies were spent on the vehicles at the how. “But, worth every penny spent.”

The cars were gathered as part of the fifth annual Best in Alabama event sponsored by the Troy Kiwanis Club. The show raised $2,600 for the club’s Eliminate philanthropy. With that amount 1444 shots will be available to mothers in developing countries in an effort to stop maternal and neonatal tetanus (MNT).

MNT is caused when tetanus spores, found in soil everywhere, come into contact with open cuts during childbirth. The disease strikes the poorest of the poor, the geographically hard to reach and those without health care.

MNT is found in 23 countries around the world and kills one baby every 11 minutes. Tiny newborns suffer repeated, painful convulsion and extreme sensitivity to light and touch. There is little hope of survival. The tetanus kills mothers too.

“MNT is highly preventable,” he said. “Just three doses of a 60-cent immunization protects mothers who pass the immunity to future babies.”

Kiwanis and UNICEF are dedicated to stopping this disease, Olmstead said.

The Annual Best in Alabama Car Show 2015 attracted 67 vehicles in a variety of categories including classics, late models, trucks and event the owner with the longest relationship with his or her vehicle.