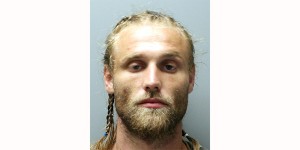 An Andalusia man was charged with possession of a controlled substance Thursday after officers recovered methamphetamine from a bag on his motorcycle.

Christopher Lee Baker, 27, of Andalusia, was being held on a $7,500 bond for the possession charge and an additional $1,500 in bonds for other misdemeanor charges.

“Officers observed the individual acting suspiciously,” Ennis said. “As a result of identifying him, they realized he had outstanding warrants out for his arrest.”

Baker was arrested on two failure to appear charges for traffic violations as well as an alias writ of arrest for a failure to complete court-sanctioned activities.

The warrants were for not attending or not completing or attending his drug and alcohol referral classes, officers said.

A subsequent search of Baker’s motorcycle yielded a small black bag attached to the handlebars with a cigarette pack and Baker’s wallet. Baker’s wallet contained two small bags of methamphetamine in the crystalized form or ICE, according to Capt. Danny Barron with Troy Police Department.

“Officers went back to the motorcycle because they intended on towing it due to his arrest,” Barron said. “There was a black bag attached to the handle bars that had a cigarette pack with his wallet. The methamphetamine was found inside of his wallet.”

The buzz about honey

Dr. Nick D’Andrea doesn’t practice medicine but he does sing the medicinal praises of honey. D’Andrea owns and operates the... read more