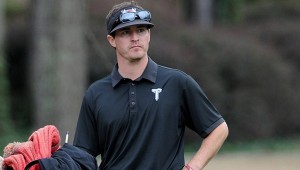 troy university Photo
Troy’s Bart Barnes has repeated for the second year as the Sun Belt Conference Coach of the Year in Women’s Golf.

Troy University’s head women’s golf coach Bart Barnes has been named the Sun Belt Coach of the Year in Women’s Golf for the second year in a row.

After spending four seasons as assistant coach for both the men’s and women’s programs, Barnes got the opportunity to take over the head coaching role for the women’s golf team.

In just his second season with Troy, Barnes has racked up these prestigious awards, along with his team also winning back-to-back conference titles.

“We had a great season this year,” Barnes said. “These young ladies are the reason why I am receiving this award. It means a lot personally because this award is voted on by the other coaches. Whent you get this award it feels really good.”

In his first two seasons with Troy, Barnes has amassed an overall record of 191-100-3.

Barnes is the first coach to win the Coach of the Year award in back-to-back seasons since 2006-2010 when Denver’s Sammie Chergo won the award five consecutive seasons.

“I don’t set this as one of my goals at the beginning of the season,” Barnes said. “Every year you set goals as a team and you try to get there. The championship means the most to me, this is just icing on the cake. This award comes from great girls and a supportive staff.”

During the 2014-15 season coach Barnes led the Trojans to an overall record of 99-33-1. The Trojans finished with three tournament victories and advanced all the way to The NCAA Regionals in South Bend Indiana.

This season the Trojans scored their three lowest 54-hole score in team history. They also scored the two lowest 36-hole scores, as well as their lowest single round score.

Trojan sophomore, Fátima Fernández Cano shot the two lowest single round scores, along with the 36- and 54-hole rounds in program history.

The Trojans finished the 2014-15 season ranked 64th in the country according to Birdie Fire. The Trojans also had Cano, Taylor McGraw, and Langley Vannoya all named to the All-Sun Belt Conference team.

No. 18 Evan Guillory pitched six innings for the Cajuns during their 5-1 defeat over UT-Arlington. No. 3 seed Louisiana-Lafayette... read more