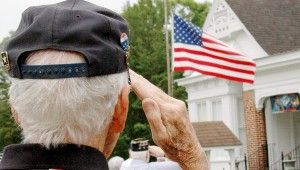 Memorial Day services were held all across the country Monday to honor those who gave their all in service to their county.

VFW Post 7055 hosted Memorial Day services in Brundidge and in Elamville. Post Commander Henry Middlebrooks said the services were times for remembrance and also times for re-commitment to country.

“On Memorial Day we remember and honor those who paid the ultimate sacrifice for our freedoms,” Middlebrooks said in speaking to the gathering at the Veterans Memorial in Brundidge. “These honored veterans were serving their country rather than asking their country to do for them. And, on this day we should also look to ourselves. We should find ways that we can serve our country and ways to stay in service to our country. If we would dedicate ourselves to service to country, our nation would be a better place.” 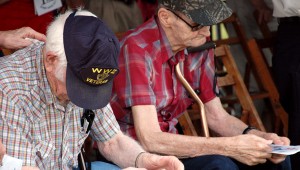 Messenger photo/Jaine Treadwell
For the Dale County Predators, saluting America’s flag is not only a privilege of free Americans, it’s also a way to honor those who served and continue their country in times of war and in times of peace.

Bruce Williams of Ozark joined the Air Corps in 1947 because he wanted to serve. Now, he seeks out services that honor the memories of those who didn’t come home.

“I am here to stand for those who stood for us,” he said.

“It is the soldier that we honor here today,” he said.

Middlebrooks reminded those in attendance to stay in service to their country and always stand up and be proud to be an American.