Man charged with theft of property after chase, wreck

A Montgomery man is behind bars after stealing a car and leading police on a pursuit Thursday night.

Nigel Latarus Williams, 23, was arrested after stealing a Lexus convertible in Enterprise. 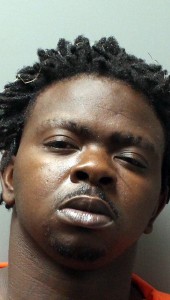 “An officer made contact with the vehicle on Highway 87 south of Troy and attempted to make a traffic stop,” Weed said.

Williams, the driver, fled from the officer. After a chase, he sideswiped another vehicle, lost control and ran off the roadway, striking a pole around 9 p.m.

Williams then attempted to flee on foot, Weed said. He was captured, and had a handgun in his possession at the time.

Troy police charged Williams with attempting to elude a police officer, possession of a concealed weapon without a permit (pistol) and reckless driving.

Enterprise police charged him with theft of property first degree.

The case is still under investigation.

Memorial Day services will be held in Brundidge, Troy and Elamville on Monday. The public is invited to attend all... read more