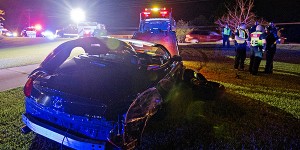 Messenger photo/thomas graning
Officers investigate a vehicle involved in a pursuit and wreck on Alabama Highway 87 Thursday night. According to Lt. Brian Weed, public information officer for the Troy Police Department, officers received a Be On the Look Out from Enterprise Police Department about a stolen vehicle. An officer encountered the vehicle on Highway 87 and attempted to do a traffic stop. The driver of the vehicle fled and attempted to elude the officer. During a pursuit, the suspect vehicle sideswiped another vehicle and wrecked. The driver fled on foot and was soon apprehended by officers. Weed said the suspect had a handgun at the time of his capture.