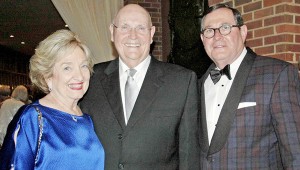 Mack Gibson, Troy-Pike Cultural Arts Center board chair, was one of seven Alabamians honored Wednesday night for their contributions to the arts during the “Celebration of the Arts” awards program at The Alabama Shakespeare Festival in Montgomery.

The awards program was presented by the Alabama State Council on the Arts, with ASCA Executive Director Al Head as master of ceremonies. Special performances accompanied the tribute to each award recipient.

Gibson was honored for his leadership in securing the success of the grassroots efforts to save Troy’s historic Classical Revival-style United States Post Office (circa 1910) and repurpose it for the arts.

Gibson called the “Celebration of the Arts” ceremony “just an unbelievable night.”

Troy Mayor Jason A. Reeves said Gibson’s persistence and dedication to the “post office project” was rooted in his innate love of the arts, his love of his community and its people and his strong belief that, when a city promotes arts and culture, good things begin to happen.

“The Governor’s Arts Award tells all Alabama and the world that Troy has an arts center that is credible and viable and I’m excited about that,” Gibson said. “It has taken dedication and determination by a lot of people for us to be able to live out our mission of the cultural enrichment of the lives of all citizens through education in and exposure to the arts. Our goal was to have an arts center where people of all ages could come and broaden their minds … and we’ve done it.”

A large group of Troy arts enthusiasts attended the “Celebration of the Arts” awards program. Gibson said their presence gave him a warm feeling about what has been accomplished through the Johnson Center for the Arts.

“The future looks bright for the Johnson Center as we are finding more ways to bring people to the arts center complex that includes the Johnson Center, The Studio and the Annex,” he said. “We are building our own culture.”

Gibson said plans are to continue to expand the Johnson Center’s ArtBridges program, which is an arts education initiative, and for the Annex to become a center of study for the visual and performing arts.

Gibson said the Johnson Center is a place that the people of Pike County can claim as their own.

“We don’t have to run to Montgomery, Birmingham or Atlanta to enjoy the arts,” he said. “We can embrace the arts right here at home. That makes me proud and humbles me at the same time.” 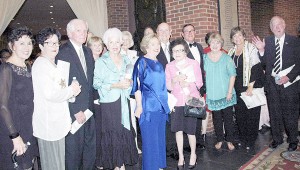 Messenger Photo/Jaine Treadwell
A large gathering of Trojans attended the “Celebration of the Arts” gala Wednesday in support of Mack Gibson who received a 2015 State Arts Award. Gibson is pictured with a group of his supporters during the reception that followed the ceremony at the Alabama Shakespeare Festival.

“Mack’s leadership has assured that generations of Trojans have been exposed to outstanding performances and exhibits at both the university and in the community, thus developing an appreciation for culture that lasts a lifetime,” Hawkins said. “Troy University could have no better partner than Mack Gibson.”

Vicki Pritchett, Johnson Center executive director, said Gibson’s success with the cultural arts project can be attributed to his love of arts and culture and his love of people.

“However, it’s Mack’s financial expertise, persistence, passion and enthusiasm for the project that keeps him and the board focused,” she said. “To quote Mack, ‘People in Troy and Pike County are passionate about the arts. Together, we are planting seeds that will grow a forest.’”

After having two agenda items withdrawn from the Troy Board of Adjustment meeting, the board made quick work of their... read more