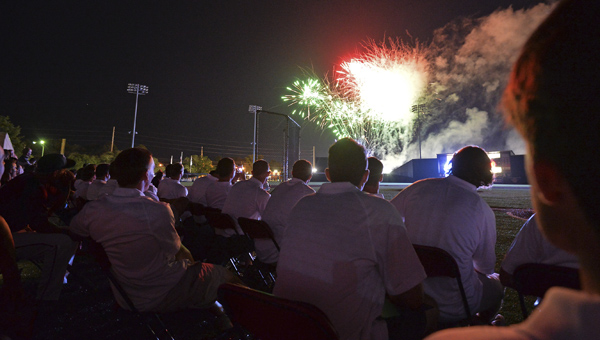 It is the second time that Troy will host this season ending tournament; Troy hosted the tournament in 2009.

The impact of this year’s tournament will be felt beyond the final score, and extend to Troy University, the City of Troy, and Pike County as a whole.

“The City of Troy is excited that Troy University is hosting the 2015 Sun Belt Conference Baseball Tournament. Troy, as a community, loves baseball and we feel it is very fitting that Troy University and the City of Troy host this tournament in the final year of Coach Bobby Pierce’s tenure leading the Trojans,” Troy Mayor Jason Reeves said. “This tournament will not only provide great entertainment for our city, it will also have a positive economic impact on the community.”

Local business and restaurants are sure to benefit from Troy hosting the tournament this year.

“The hotels, the restaurants, and the shops will all benefit and of course the people like the games and that’s a good part of it too,” President of the Pike County Chamber of Commerce Kathy Sauer said. “The important thing is when they come here they have a pleasant experience. They tell other people and that will be a conversation about either returning, or relocation. It really opens the door for not only the state but for the city of Troy as well.”

The tournament will bring family and fans of schools outside the state of Alabama, many of them seeing Troy for the first time.

“It’s always great when we get to host an event, especially the Sun Belt Baseball Tournament. It brings people into town and into the hotels, restaurants and shops,” Director of Troy Public Relations Shelia Jackson said. “Troy is a wonderful place to live and to visit. We have so much to offer for families that come with the teams. We are excited to show Troy as a friendly, small town.”

The Sun Belt Conference Tournament consists of the conference’s top eight teams determined by their winning percentages during the regular season.

The tournament features a double-elimination format culminating with a championship game on Sunday.

The winner of the Sun Belt Conference Tournament will receive an automatic berth in the National regional tournament.

The South Alabama Jaguars enter the 2015 tournament as the number one overall seed. The Jaguars sit atop the conference with the most all time wins in the tournament with 79 victories and have won the tournament 11 times, the last one coming in 2005.

The Trojans enter this season’s tournament as the number two seed after finishing the season with an 18-10 conference record, and an overall record of 30-23.

In 2009, the last time the tournament was held in Troy, the Trojans were knocked out after being defeated by Louisiana-Monroe. This season the Trojans enter the tournament arguably the hottest team in the conference. The Trojans have won their last five conference games and 10 straight from Riddle Pace Field.

Troy will open up round one with a 7:30 p.m. first pitch against UT-Arlington.

The opening around of the tournament will begin Wednesday starting at 9 a.m. with Georgia state taking on Georgia Southern. Arkansas State and South Alabama will close out the morning session at 12:30.

The night section will start at 4 p.m. with Texas State taking on the University of Louisiana-Lafayette. Troy will close out day one with a matchup with the University of Texas-Arlington. First pitch is scheduled for 7:30 p.m.

Tournament passes can be purchased starting at $50.00 for general admission seats and $75.00 for reserved seating.

Fans will also be able to purchase session game tickets for $10.00 for general admission and $15.00 for reserved seating.

By Mike Hensley Baseballs were soaring and fireworks were screaming Tuesday night at Riddle Pace Field during the opening ceremonies... read more