The huge cactus plant that is causing motorists to do a double take and others to stop for “selfies” is just as amusing and amazing to its cultivator.

Virginia Touchstone’s century plant has been a showstopper on Henderson Highway for two weeks and counting. Even Touchstone continues to be amazed at the way the cactus has “shot up” and she’s a little sad, too.

The century plant was an offering from Touchstone’s daughter about 15 years ago. The cactus did just what a cactus is supposed to do. It sent forth leaves with prickly rims and sharp spikes at the tip that can pierce to the bone.

Over the years, it continued to grow pricklier and Touchstone thought that would be the extent of what the century plant would do.

Then, this spring the plant shot up a tall, branched stalk and, much like Jack’s beanstalk, it seemed to reach into the clouds. Then, the cactus had even more surprises in store for Touchstone. It became heavily laden with yellow blossoms that make a pretty picture against the blue sky. 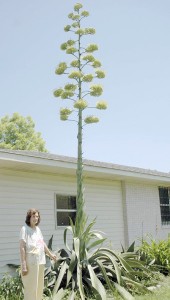 Messenger photo/Jaine Treadwell
Virginia Touchstone’s century plant has been a showstopper on Henderson Highway for two weeks and counting. She estimates it stands about 16 to 18 feet.

“It’s supposed to be a century plant that blooms every 100 years but I’ve not had the plant but 15 years, so I don’t understand why they call it a century plant,” Touchstone said.

What Touchstone learned about her show-stopping plant is the century plant or the agave American does have a long life, usually 10 to 30 years. But it only blooms once in its lifetime.

Near the end of its life, the plant sends up a stalk that may reach up to 25 feet. Touchstone estimates the stalk of her plant is about 16 to 18 feet. The plant dies after flowering but produces suckers from the base which will continue its growth but never to flower again.

Touchstone said it’s sad that the century plant will never bloom again. But she never expected it to do anything but prick and stick. To see it shoot up and produce such pretty flowers was a wonderful surprise, she said.

A footnote to the century plant is that, if the flower stem is cut before it flowers, a sweet liquid called honey water gathers in the heart of the plant. The liquid may be fermented to produce a drink called pulque. The leaves yield fibers that are suitable for making rope.