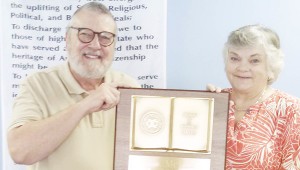 Messenger Photo/Jaine Treadwell
Dr. Ed Merkel, chair of the Troy Exchange Club’s awards committee, presented the “Book of Golden Deeds Award” to Donna McLaney, who volunteers with many charitable organizations throughout the county.

Donna McLaney has been honored by the Troy Exchange Club with the 2015 Book of Golden Deeds Award.

In presenting the award, Dr. Ed Merkel, chair of the club’s awards committee, thanked McLaney for her service to the Troy Exchange Club and for her volunteer service to other clubs and organizations throughout the community.

“Volunteer efforts are very important to our society and should not go unnoticed,” Merkel said. “The National Exchange Club’s longest running project, the Book of Golden Deeds Award, recognizes dedicated volunteers who give endless hours of their time and talents toward making their communities better places to live. Ever since the Exchange Club of Huntington, Ind. sponsored the first award in 1919, thousands of unsung heroes and heroines have been recognized.”

McLaney said she was humbled by the award and also very honored.

“For me, community service has its own rewards,” she said. “I volunteer because I love people and I enjoy being of service to others. It’s what I can do for my community.”

McLaney said she never expected such an honor as the Book of Golden Deeds Award.

“I’m sure most all volunteers do what they do without any expectations of awards or recognition,” she said. “I never expected anything like this but I am so appreciative. I hope that I can live up to what this award represents. I will try my best.”

McLaney is a nine-year volunteer at Troy Regional Medical Center as a “pink lady.” She volunteers with Sav-A-Life and assists with the annual Low Country Boil fundraiser. She volunteers with the Pike County Heart Association and has volunteered at the Colley Senior Complex. She is a past member of the Troy Pilot Club.

Hank Jones, former superintendent of Troy City Schools, was recognized Thursday as the guest of honor at the Troy Boy... read more