ON A ROLL: Sister Schubert shares her story 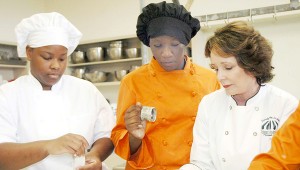 Patricia “Sister Schubert” Barnes’ story is the Cinderella story of the grocery business.

There’s no doubting that.

Barnes started her Parker House style rolls business in her kitchen in her hometown of Troy using her grandmother’s recipe. As business began to “roll” in, she moved her kitchen to a warehouse at her dad’s furniture store.

Barnes spoke to the Culinary Arts Academy students before she put on the chef’s hat and led them to the kitchen.

And, that’s exactly why Paula Hinson, academy instructor, invites Barnes to the academy every two years.

The students are impressed by what Barnes has accomplished, and they buy into her message about setting goals and then working hard to accomplish them, Hinson said.

“Sister Schubert is originally from Troy, and she has accomplished great things,” Hinson said. “She shares her belief that God has given each person a gift and with that gift they can make their dreams come true. That’s a message that the students need to hear – the message that no matter where they live or where they go to school, they can accomplish their goals.”

Barnes told the students that her dream began when she was a little girl standing on a stool making out rolls in her grandmother’s kitchen.

“I come from five generations of great cooks,” Barnes said. “The path to my true passion began in Gommey’s kitchen. When I was 12 years old, I was making the rolls for family gatherings. God had given me a gift and the desire to serve others. With Sister Schubert’s rolls, I am serving others. My dream has come true.”

Barnes quoted Thomas Jefferson in saying that he believed in luck, but he also believed in hard work. She encouraged the students not to depend on luck to accomplish their goals.

Barnes said she gives God all the glory for what she has been able to accomplish.

“Before I start every day, I pray that the words of my mouth and the meditations of my heart will be acceptable in His sight, and I go about my day knowing that God is with me and it will be a good day.”

Then, it was into the kitchen where Barnes is a master of the yeast roll. She shared tips on how to make Parker House style rolls that will have people coming back for more. She showed the students how to knead the bread and tipped them that over-handling the bread causes it to lose its elasticity. Punching down the bread removes any air pockets. Rolling out the dough can be overdone causing it to lose its puffiness.

The students had the opportunity to cut out the rolls with a cookie-type cutter. Then, Barnes showed them how to “make out” the rolls by stretching the dough slightly, folding it over and then patting it into the pan — 10 rolls around the side of the baking pan, then a row of five with one in the middle.

And, that was what the students “kneaded” to know about making rolls. And, it was a lesson well learned, they all agreed. 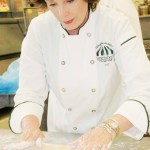 “Sister Schubert” Barnes is originally from Troy. She moved her bakery from a warehouse in Troy to Luverne in 1994. 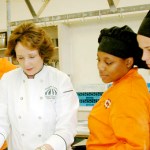 Sister Schubert demonstrated the art of making rolls to Jaquetta Brundidge and Ebony Williams. Schubert visited the Culinary Arts Academy at Charles Henderson High School Tuesday. Patricia “Sister Schubert” Barnes is originally from Troy. She moved her bakery from a warehouse in Troy to Luverne in 1994.