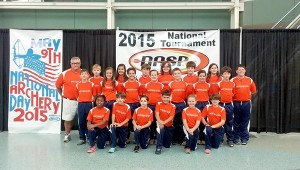 Competing with more than 12,000 other archers, the Troy Elementary archery team placed 65 out of 148 teams in the National Archery in the Schools Program 2015 Archery Nationals held in Louisville, Ky.

Noah Presswood out shot over 1700 kids, said archery head coach Forest Lee, finishing 240 out of 1959 students. Sarah Madison also placed well for the TES archery team. Lee said she was the highest placing girl for the elementary team, placing 214 out of 1594 students.

Caleb Watkins finished 78 out of 1959 boys in the fifth grade boys division. Lee said Watkins was the team’s most consistent archer. Will Templin also shot well for the Trojans, Lee said, placing 362 out of 1959 students.

“That was outstanding,” Lee said. “I mean that’s great for him. He finished 62 out of 1152 for the fifth grade boys, which is really great for him.”

The archery team’s only high schooler, Abigail Salmons, shot a 273 at nationals, and Lee said she had done very well all season long.

“That’s very commendable,” Lee said. “Abigail and I both know she has done better, but in that type setting at Nationals, traveling all the way to Kentucky, the excitement of a national tournament, that’s extremely well. It’s very commendable for her to place 393 out of 1300 archers. She was in the top fifth of high school archers. It gets even better when you look at the overall girls rank. Looking from a high school perspective, she should have shot better than all the elementary and middle school girls, which she did.”

The team as a whole finished 65 out of 148, and Lee said that was not as good as they hoped but far better than they expected their first time back at nationals in several years.

Lee said Shopville Elementary, out of Kentucky, was the overall elementary winner, but he was still pleased with the effort his team had put in.

“We were the third best team out of nine in the elementary division,” Lee said. “Sarah Lynn finished 26 and the other school that edged us out was Huntingdon Elementary.”

Lee said two individuals who were slated to compete for the TES archery team were unable to participate in Saturday’s competition, and he feels that had they been there the team would have scored far better than they did.

“If those two had been able to come, I feel like we would have been able to score 80 points better,” Lee said. “In my opinion, we could have finished in the top 30. But, for our first time at nationals in a long time I was pleased. The kids did a great job. The parental support was fabulous.”

Approximately $3,000 was raised to cover new uniforms, entry fees, some travel expenses and dinning for the Archery team. Lee said he would like to thank the following donors and sponsors for their continued support of the TES archery team:

“We all would like to thank the people who donated their money and time to our program,” Lee said. “I know it means a lot to the kids and those children’s parents. Troy is well known to support its schools. By far we got a tremendous amount of support in a short period of time. From about the 14 of April until the time we shot, we got a tremendous amount of support form our community and our boosters, private individuals and businesses.”