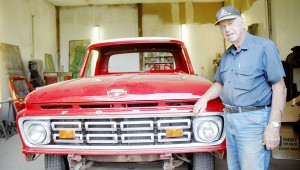 Snodgrass is in the process of restoring a Ford truck for Kenneth Wilson. After that, he’s turning all of his restoration efforts toward lawn tractors.

“It was a Cadillac,” Snodgrass said with a smile of remembrance. “I was so proud of that tractor I wouldn’t even let a fly light on it. When it wasn’t in the field, it was shining in the shed.” Snodgrass can’t explain his fascination with the Massey-Harris tractor. He had been around tractors all his life. He grew up on a farm and learned to drive on a tractor, a Case.

“Those early Case tractors didn’t have an electric starter,” Snodgrass said. “You had to crank them to get them started. But the Massey-Harris 446 was brand new, and it was just about the prettiest thing I’d ever seen.”

Somewhere around 1956, Massey-Harris became Massey-Ferguson, and the tractors were “altogether different.”

Snodgrass recognized the benefits of the Massey-Ferguson tractors, but he was still in love with the red and yellow Massey-Harris.

Snodgrass grew up and away from the farm. He worked at a John Deere “tractor place” in Missouri before moving to Alabama where he worked for Massey-Ferguson companies in Cottonwood and Dothan.

“I made a living painting tractors,” he said. “Forty years in all.”

Snodgrass had been around tractors all of his life. When he retired from a weekly paycheck that was as far as he got away from the Massey machines.

It was Snodgrass’ desire to restore the aging Massey-Harris tractors to their original condition, a condition that would be as handsome as that first Massey-Harris 446 that his dad drove home more than a half century before.

When Snodgrass found a Massey-Harris tractor to restore, he was determined to work from the ground up.

“I dismantled the tractor and put it back together piece by piece,” he said. 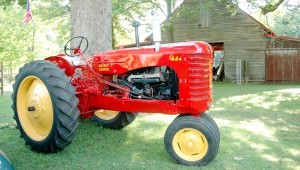 Earl Snodgrass of Brundidge masterfully restores antique vehicles. Although he prefers tractors, Massey-Harris tractors, he restores classic trucks as well. He has restored Mike Robinson’s Ford truck that his dad drove for about 40 years. When he was a boy, Snodgrass fell in love with a Massey-Harris 446. After all those years, he’s still in love.

But putting what appeared to be a piece of junk back together was a long, painstaking task because each individual piece of the tractor had to be “restored.” Snodgrass said it’s not just the body of the tractor that has to be restored; it’s all the “sparks and plugs” that make it go as well.

“Really, with ‘old’ tractors, you can dismantle one and put it back together using just common sense,” he said.

Using common sense, Snodgrass bought and restored seven Massey tractors. He proudly drove them in parades, and his restoration talents were widely recognized and widely requested.

His truck work is highly regarded because not only does he reassemble the truck so that it is in perfect working condition, it is also perfect on the outside.

“You have to be very careful with the body work,” he said. “It’s got to be right before you spray paint it because that’s it. Whatever you’ve done will show. So it’s got to be right. When you paint a vehicle. That’s it.” Snodgrass has restored several trucks. One belongs to Mike Robertson, and it’s a showstopper. When it was on parade in Brundidge, it turned every head.

Snodgrass is restoring a truck for Kenneth Wilson, who said he wouldn’t trust the restoration to anyone else.

“Earl Snodgrass is the best and he’s doing fantastic work,” Wilson said. ”It’s a 1964. My daddy got it in May of 1971, and he died in November. I’ve been wanting to get this truck restored for 10 years, and I’m just getting around to it.”

Snodgrass said trucks are harder to work on because there’s so much sheet metal, and they are bigger with more parts. And, he doesn’t have plans to restore any more trucks, and he’s not going to parade his tractors anymore.

“I got tired of loading the tractors and hauling them to the parade site and unloading them and then loading to again to haul back home and unload again,” he said. “

Snodgrass has sold five of his seven tractors in anticipation of his moving to Russellville where his son lives.

But, he’s not going take his hand from the plow, so to speak. He will continue to restore tractors, just on a smaller scale.

Snodgrass gets a lot of pleasure from the challenge of restoring classic lawn tractors, but there’s still nothing that make his heart flutter like a well-restored Massey-Harris tractor.

‘ALL ABOUT THE CHILDREN’: Glenda Gunter retires after 48 years of teaching

Glenda Gunter, first-grade teacher at Covenant Christian School, is retiring after 28 years at the school. She will take with... read more