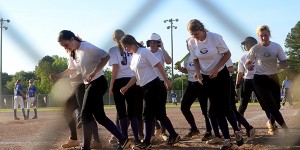 Messenger Photo/Scottie Brown
Carmen Kellyis met at the plate by her fellow Goshen teammates after hitting a home run during the Eagles’ outing agaisnst Reeltown.

The Goshen Eagles used power and defense to win the first two games of the AHSAA Class 2A South Central Regional tournament Thursday at the Troy Sportsplex.

In game one the Eagles relied on strong pitching and timely hitting en route to a dominating 14-0 win against Holy Spirit Catholic in five innings.

The Eagles started early in the first inning, sending eight batters to the plate. Carmen Kelly, Galloway, Casey Allans, and Fran Warrick all came in to score giving the Eagles an early 4-0 lead. 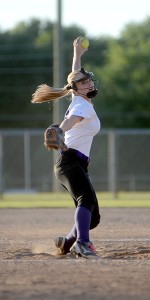 Messenger Photo/Scottie Brown
Lizzy Galloway winds up her pitch before releasing the ball.

Galloway and Garret took it from there. Galloway struck out all six of her batters in the first two innings While Galloway held the Titan offense scoreless throughout the rest of the game.

After the Eagles put three more runs up in the bottom half the second, that ultimately put the game out of reach. Allans belted a three run blast and that homerun made up part of a five run inning for the Eagles, giving them a 12-0 lead.

Allens continued her stellar play by belting another double in the bottom of the fourth, plating another run.

The win for the Eagles set up a second round matchup against Reeltown.

“It was big, it got the bats going. It gave us a chance to rest our pitcher a little bit which is important for Lizzy’s arm,” Warrick said. “It was a good win and it was great to win a big to give us a little rest.”

The Eagles carried the momentum into game number two, and pitching and defense led the way to a 12-3 win.

“We played good defense. Our defense won that game for us tonight. We have been working hard, and we were bound and determined not to have the bunt beat us,” Warrick said.

Fran Warrick got the scoring going once again in the first inning when she hit a homerun scoring Kelly and Kati Thomas giving the Eagles the early 3-0 lead.

The Rebels bounced back in the first with two infield hits and a two-run double that tied the game in the bottom of the first.

Galloway settled down from there and shut out the Rebels giving the Eagles the opportunity to gain and expand their lead.

“I was proud of Lizzy. She controlled the game after that first inning. Lizzie just can’t leave the ball that much over the plate and we made that adjustment,” Warrick said.

With the game tied in the second, Kelly led off and belted a deep homerun to centerfield giving the eagles a 4-3 lead. The Eagles tacked on three more runs in the third to give them a 7-3 lead.

The Eagles sent nine batters to the plate in the fifth inning and scored the game’s final five runs giving the Goshen the round two win.

The Eagles will have a third round matchup up at 11:30 a.m. today against Horseshoe Bend.

Troy falls to FAMU at home

By Mike Hensley In the final mid-week game of the season the Trojan bats fell silent, and poor defense led... read more