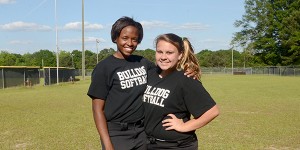 The Pike County Bulldog softball team will be traveling to Mobile today for the AHSAA Class 3A region tournament, and head coach Fawn Sims said the young team has come a long way since the beginning of spring practice.

“It’s been a roller coaster, up and down,” Sims said. “I tell other coaches that your first year is your hardest, but this year hasn’t been hard. It’s been a transitional year for us and our program. The girls that I have left standing now are my winners. They have worked very hard. They’re here to learn, and they absorb everything I tell them.”

The team has just two seniors, pitcher Keri Taylor and Sh’ana Lee, centerfielder. Sims said the pair has brought a lot of enthusiasm and intensity to the field.

“If you’re not each others biggest fans? Who is going to be,” she said. “I think a lot of our success has come from our communication on the field, which goes into us picking each other up. Keri doesn’t throw every game, but I can look at her and say, ‘Alright, let’s go to work.’ She knows her strengths and weakness, as does Sh’ana. If she didn’t pitch an inning, Keri is the first one to hive-five the girls when they get back in.”

Lee, who could potentially go on to play at a collegiate level, said the group of girls she played with had easily become her family.

“I’ve seen us grow together as one,” Lee said. “We’ve had three different coaches since I’ve been here. My ninth-grade year, we had a coach (who) left. My tenth and eleventh grade year, we had another coach and she left. Now, we have Coach Sims. We’ve become so much better.”

Going into regional play, the Bulldogs will need to bring focus and communication.

Sims said she knows her players are capable of not only making it to the next the second day of the double-elimination tournament, but also winning it all – if they are firing on all pistons.

“It’s coming together, 10-fold, but we are going to have to score and play tight defense” Sims said. “We are going there to compete. Win, lose or draw, we’re going to compete. Our defensive philosophy this year is ‘stop the ball.’ That’s been a big thing for us. I’m as aggressive of an offensive coach as you can be. If the ball is in the dirt, we’re going to advance our runners.”

The Bulldogs will face Opp High School at 1 p.m. today. If they win, they play again at 7 p.m. If they lose, they play at 5:30 p.m. The tournament continues through Saturday.

Senior pitcher Austin Ingram lets one go for the Trojans against St. Paul Episcopal School in the quarter-final round of... read more