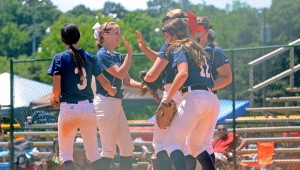 The Pike Liberal Arts softball team’s infield players join together in the pitcher’s circle during the match up against Autauga Saturday. The Lady Pats won their first game against Monroe Academy Saturday in 3-0 shutout but lost to Autauga 4-3 to end their season.
MESSENGER PHOTO/COURTNEY PATTERSON

The Patriots won their first game in a 3-0 shutout against Monroe Academy. Park said Saturday having seen the Volunteers several times during the season seemed to have been what helped the girls to win the contest.

“We’ve played them a lot, and we knew what to expect,” Park said. “We played a lot tighter. We played better. We were more loose, relaxed and focused. What matters most is that we came out with a win.”

The Patriots faced Autauga shortly after and lost 4-3, but Park said she had still been able to see bright spots of promise in the Lady Pats during the game.

“Kayla Benton went two for four, Bailey Rushing went three for four with two doubles and Amberlyn Baker went one for four with one walk,” Park said. “We didn’t hit like we usually do, but we were able to connect some. Kayla Dendy had a good day going two for three, and Mya Terry had a great day. She is the nine batter for me, and she really stepped up Saturday and got a lot of hits.”

Sam Yarborough, regular third baseman for the Lady Patriots, started Saturday in the circle against Autauga, and Park said she had a good outing in the circle. Rushing, the Patriots’ regular starter, came in for relief and pitched a little more than two innings.

Park said Autauga had been able to score several runs on the girls early really digging them into a hole the Patriots couldn’t seem to get out of.

“As a coach you can only want your girls to win so bad, but we ran out of gas,” Park said. “The other team was able to get some runs on us early. Am I sad? Yeah, it sucks. We should have won it. Glenwood was the only team we had to beat Twice. In the end, we just couldn’t get there.”

Park said Dr. Steve Grice had spoken to the team Friday night following their win against Morgan Academy and had really instilled the idea of “why not us?” to the team.

“He kept telling the girls that we should be able to win it and I think that was really big for them,” Park said. They believed in themselves. They had each others back the whole time.”

Park said several calls had led to the team’s loss, but nonetheless she said the team had, had opportunities to capitalize on it just never happened. Jacy Oates was the last out of the game for the Patriots, and Park said she had taken it harder than the rest of the players.

“We had plenty of opportunities,” Park said. “We had the opportunity it just didn’t go our way. Jacy took it hard. We were packing up and taking everything to the parking lot. She thought it was her fault, but ultimately we know we are a team and we have to play together and win together. That day we just lost together.”

Park said she gave her two seniors the offensive and defensive most valuable player awards for the season and she had been able to see so much growth out of the two seniors.

“AB has so much drive and passion for the game,” Park said. “She has become such a great leader and has been such a mentor and role model for the younger girls. Last year with her and Kayla, it’s been night and day. John Ramage, president of sport boosters, said they had moxie, swag. They both have it, and I can’t even explain it.”

Park said both girls had constantly been the team’s motivators throughout the entire season, no matter wins or losses.

“This year they have been just so solid for our team,” Park said. ‘They’ve been our motivators even when they get down. You can always count on them, and they have your back. As a coach it’s been a blessing to have both of them because they’re just great kids.”

Park also named Bailey Rushing as the Patriots’ pitcher of the year and Elaina Strother as most improved for the Patriots.

The Lady Pats ended their season 31-11 overall, and Park said she could not have been more proud of the effort the team had given all season.

“Those girls love softball,” Park said. “I am so proud and pleased with the way they played this season and how much heart they really gave it. It’s tough to see them lose, but I’m thankful for the time I’ve had with them. These girls are my heart. I don’t know that I’ve ever cared about girls like I do them.”