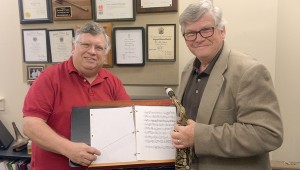 Submitted Photo
Director james Smith, left, works with his brother, Ray, to prepare for his big band saxophone solo at the Southeast Alabama Community Band concert. Monday at 7 p.m. at the Crosby Theater.

The Troy Arts Council will present The Southeast Alabama Community Band in concert at 7 p.m. Monday at the Claudia Crosby Theater on the campus of Troy University. The concert is free and open to the public. With this concert, the band will celebrate its 15th season.

The much anticipated spring concert features many of the top musicians in Southeast Alabama and Southwest Georgia. James Smith will direct the band.

Other band favorites to be performed at “The Italian in Algiers,” “Lincolnshire Posy” and “The Sound of Music.”

And, of course, what would a band concert be without marches.

The Southeast Alabama Community Band was founded by Long in 2000.

Shaunna West, owner of Perfectly Imperfect in Downtown Troy, and her husband, Matt, will be debuted on HGTV Sunday, May... read more