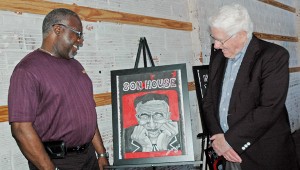 Messenger Photo/Jaine Treadwell
Ed McCloud, left, stands with Jim Pruitt as they talk about his work. McCloud and Pruitt had booths that stood next to each other at the flea market at East Brook, which was the beginning of their friendship.

Some things happen by chance.

If, by chance, Ed McCloud and Jim Pruitt had not been assigned booths side by side at the flea market at East Brook, they would not have become friends.

If they had not become friends, McCloud might not have rediscovered and/or revived his artistic talent.

“I have always like to draw,” McCloud said. “When I young, I was always drawing something. When I went into the Army, instead of going out on the town, I would stay in the barracks and draw.”

But, as a member of the Montgomery Police Department, McCloud had little time for doodling in the arts and, over time, he forgot how much he enjoying drawing.

When he set up a booth at the flea market to sell his wares, he just happened to be next to a gentleman who was a collector of vinyl records and was selling off his extras.

“We started talking and got to be good friends,” McCloud said. “I had retired from the police department and had started drawing a little. Jim saw my drawings and said I should do more of it. That I had talent.”

The more McCloud drew, the more he wanted do draw. He was interested in portraits and started paying attention to the artwork in magazines and entertainment posters. He decided to try his hand at capturing the likenesses of some rather famous people.

His friend in the booth next door had album covers that he found attractive and faces he wanted to paint.

“The faces of the men who played the blues ….there was something about them.”

The more McCloud “studied” the faces of the bluesmen, the more interested he became in them and their music.

He has recently begun a series of paintings of some of the most popular blues singers since the early 1900s. Men like B.B. King, John Lee Hooker, Howling Wolf and Blind Lemon Jefferson.

“Amazing and amazingly different,” is the way Pruitt describes the artwork of his friend.

McCloud unveiled his “blues collection” at the Wiregrass Blues event at The Studio Thursday night. And those who attended found it to be amazing and very different.

Wiley White, Johnson Center for the Arts development, said McCloud’s work is unique and captures, not only the images of the famous bluesmen but their character as well.

“Hopefully, we will be able to feature the artwork of Ed McCloud at the Johnson Center soon,” she said.

Everything will be coming up “roses” after Spring Plantin’ Days Friday and Saturday at the Pioneer Museum of Alabama. The... read more