EAGLES WIN:Goshen beat Zion Chapel 9-7after falling to the Rebels 7-1 in first game 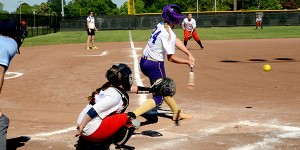 After losing to the Zion Chapel Rebels 7-1 in their first game of the night, the Goshen Eagles softball team kicked it into gear coming back to win 7-3 over Elba and 9-7 over Zion Chapel finishing out the night.

Eagles head coach Amy Warrick said after the first game she knew her girls needed to turn a complete 180 to play at the level she expected of them.

“First game, we were really tight,” Warrick said. “We came out and did not hit like us at all. We knew it was a big game. We got behind 7-1, and that was about the end of the story.”

While the bats were lacking in the Eagles first showing against the Rebels earning only one run off of a Carmen Kelly home run. Warrick said Kelly had consistently been a solid hitter for the Eagles throughout the entire season.

“Carmen Kelly hit a homerun, and that’s really the only bright spot I saw from that first game,” Warrick said.

The Elba Tigers got an early start on the Eagles earning one run in their first inning at bat, but the Eagles sounded back with a score of their own off of a Casey Allen RBI double batting in Kelly.

After putting another run in the top of the second, the Tigers took to the field hoping to hold their lead, but the Eagles momentum had picked up.

The Eagles started out solid with Tessa Little singling for Goshen putting a man on the bag, and the rest of the lineup followed suit. Kate Warrick, Lexi Ellisor, Sydney Galloway, Kelly and Lizzy Galloway all singled for the Eagles, with Kelly and Sydney earning RBIs for the inning.

The Tigers wouldn’t score again until the sixth inning earning just one more run for the Tigers off of a walk. The Eagles, however, would go on to score three more in the bottom of the third securing their seven runs.

Warrick said the girls had really worked well together to come back off of the loss to Zion Chapel, a team the Eagles had previously beaten twice this season, to win against the Tigers.

“I was pleased that we got the bats going against Elba,” Warrick said. “This team always seems to do better when we have our bats going. And, defense got going and we seemed to hold them really tight. I thought we looked much better.”

The third game for the Eagles was just the second for the Rebels, but both teams came into it with their eyes open and ready to win. Zion Chapel head coach Richard Johnson said the Lady Rebels had played great games against the Eagles Thursday, but like any coach, wished his girls were the ones walking off the field with a win.

“I am very pleased with how we played,” Johnson said. “Obviously, nobody likes to lose. The first ball game we played extremely well, hit the ball extremely well, played defense extremely well and even the last game. The thing about Goshen is, you have to try to keep them from scoring early. The second ball game they came back and scored three or four runs early right there at the start of the game, and that makes it difficult for us. But, I’m proud of the girls and the way they kept fighting.”

The Eagles and Rebels are set to face off once again in Goshen for the deciding game. First pitch is set for 3:30 p.m. for the game.

High school baseball and softball fans around the area will soon have the opportunity to play sports editor. The Messenger... read more