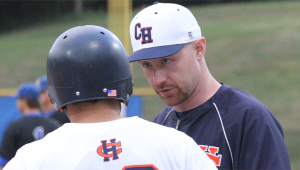 Messenger Photo/Dan Smith
CHHS Head Coach Derek Irons goes over a situation with Devin Suddith in the Trojans’ win over Rehobeth last week in the second round of the AHSAA state playoffs. CHHS goes to Mobile to take on St. Paul’s in the third round Friday.

The Activity Bus of Charles Henderson High was loaded with equipment and baseball players Thursday afternoon – and ahead of them lay 175 miles of country roads and interstate.

The knowledge that only one team will advance beyond the Class 5A quarter-final round in Mobile and the other will see their dream of a state championship come to an end is also at hand.

The Trojans of CHHS visit perennial power St. Paul’s Episcopal School Friday in Mobile for a 4 p.m. double-header, with an if-necessary game slated for noon Saturday.

CHHS holds a No. 1 ranking and 35-2 overall record, while St. Paul’s has been tough to beat at home and everywhere else for that matter, with a 37-2 overall record and No. 2 ranking in the ASWA Class 5A poll.

The Trojans advanced to the third round by defeating Beauregard and Rehobeth in the first and second rounds, while St. Paul’s took playoff series wins over Escambia County and Faith Academy.