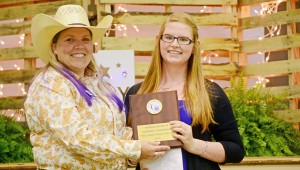 Joy Brigham with the American Cancer Society, left, presents Morgan Grissett a plaque to recognize her as the 2015 Relay for Life Honorary Chairperson.
MESSENGER PHOTO/COURTNEY PATTERSON

The people of Troy saddled up at Park Memorial United Methodist Church Tuesday to celebrate life as they “Give Cancer the Boot.” The fellowship hall of the church was filled with cancer survivors for the Annual Survivors’ Dinner.

“Morgan is a true inspiration to all of those who have had the pleasure of knowing her,” said Heather Minton as she introduced Grissette at the dinner.

During the event, Grissette gave a brief description of her journey of battling thyroid cancer.

“While I’m honored to be selected as the honorary chairman of Relay for Life, cancer isn’t the word you want to hear going into your junior year of high school,” Grissette said. “Or ever, for that matter.” While she was looking forward to major events and memories for her junior year, she said that cancer had other plans.

After having half, and eventually all of her thyroid removed, the doctors told her the cancer was gone, but her scans said otherwise.

“I kept wondering to myself, ‘Why do the doctors keep lying to me?’” she said. “They kept telling me that I was fine and that everything was going to be okay, but it wasn’t. How could everything be okay? The word ‘cancer’ is not okay. I felt like no one cared.”

Grissette said that one of the things that got her through were the thoughts of those who care about her and were constantly praying for her.

“The word ‘cancer’ is enough to put fear in any heart,” she said. “It has stolen a part of my life, but I wouldn’t change the experience for a thing. It’s life-altering, not life defining. There is light even in the darkest places.”

Relay for Life beings at 6 p.m. Friday at the Troy Parks and Recreation Center.­