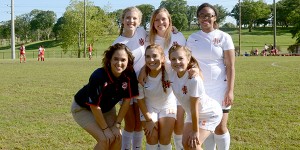 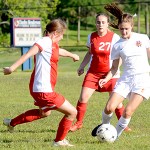 Despite playing one of their better games for the season, the Charles Henderson High School girls’ soccer team fell 1-0 to Carroll High School after a penalty kick on their senior night.

Head coach Rick Braisted said he was proud of the effort he saw the girls put in on the field during their match up against the Ozark team.

“I thought they played aggressive, played hard,” Braisted said. “Everybody got to play, on senior night all the seniors got to start. We’re still working on finishing, putting the ball in the back of the net. Our defense is holding tight, midfield is OK, we just need to finish on the offensive end.”

Wednesday’s game was the last home game of the season for the CHHS Lady Trojans, and Alex McLendon, senior captain, said she was thankful to have been able to spend as much time with the team as she had.

“I’ve been watching soccer since I could talk, since I could walk, so I’m really going to miss being around these girls and watching them improve so much,” McLendon said. “It’s incredible the amount of improvement we’ve had in the past two months with half the team not playing soccer before. I’m gong to miss the girls on the team and my sisters. It was an honor being captain of this amazing group of girls that have just shown through adversity and everything we’ve been through this year.”

This past season was the first for Charles Henderson High School to have a girls’ team, and many like Natalie Smolcic came out for the team without having played soccer once.

“I watched soccer a lot, and I was just really intrigued by being on a brand new team and playing a new sport,” Smolcic said. “I just thought I would try it, and I’ve really grown to love the game itself now that I know how to play it.”

Charlotte Pryor, another first-year soccer player, said she encouraged anyone to try the sport if it’s something they think they’re interested in.

“I would tell them to try it and see if they like it or not,” Pryor said. “Most of the things you don’t try are the things you wish you had tried. I’m going to miss the friendships and sisterhood that I made this season with everybody. I kind of wish that I had done it earlier and gotten more experience.”

Despite losing, players weren’t disappointed in gameplay, though. Megan Dansby, a three-year soccer player, said the team had done well against their opponents Wednesday.

“Tonight was a very good game, especially for us,” Dansby said. “We all did really well. I would tell anyone wanting to play that it’s a great experience. Stick with it. It’s worth it in the end. I have sisters now, which is awesome. It’s been really fun.”

Kelsey Foster, one of the first girls to try and form a girls’ soccer team, had similar things to say as her fellow seniors following the conclusion of Wednesday’s match. But, ultimately, she said she was thankful to see an idea come to fruition and leave the legacy of a soccer team behind her when she graduates.

“It was a huge deal for us to start this team,” Foster said. “I remember when this was a just an idea. We worked so hard to try and get this started. It was exciting though. I wish we would have had it my freshman year.”

Braisted said that over the course of the season he has seen his girls get constantly better, which as a coach is something he looks for in a team as well as the aggressive-nature many of them had adopted throughout the season.

“I liked the fact that we seem to be constantly getting better,” Braisted said. “I just wish that there were another two weeks left in the season. The more aggressive you are the better, normally in a sport. I know when I look down at the end of the game and they have scrapes on their needs and they are out of breath with dirt all over them, what else can you ask for?”

Wednesday’s match signaled the last home game for the Charles Henderson soccer team, and Braisted said he was thankful for the support the community had provided to not only the girls team, but the boys team as well.

“I want to thank everyone for the support we’ve had this season,” Braisted said. “Every year I’ve been here, we’ve had more and more fans come to games. It makes for a great environment for our kids to play in.”

Both the boys and girls team will travel to Dothan today to face Houston Academy with the girls playing at 5 p.m. and the boys playing at 7 p.m. Braisted said both teams were looking to be more offensive-minded during their match ups and hoped the teams could come home with a win.

“We’re going to focus on being offensive-minded and scoring goals,” Braisted said. “Their girls varsity team is in the playoffs. They’re very well coached. We’re just looking to go down there, score some goals and have some fun.”