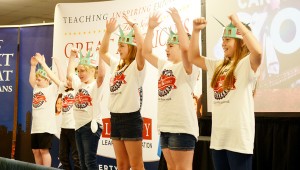 PLAS students celebrate being a Super Citizen by singing “Only You,” a song they learned during the 10-week program.

More than 1,000 students from Pike Liberal Arts, Troy Elementary and Pike County Schools will gather in the next few weeks to celebrate completing the 10-week Super Citizen Program that teaches students the importance of their roles in America’s future.

The program began with kick-off celebrations featuring Libby Liberty on January 28 and 29. Since the kick-off, the students have engaged in lessons teaching about character building, financial literacy and civics.

“One of the best ways to learn those lessons is by learning about and honoring real-life American heroes that you know,” said Amy Garrett, PLAS assistant headmaster. “When you honor a hero, you become a hero.”

Now the students will graduate as Super Citizens, gathering with students, faculty and community leaders. During the celebration ceremony, students who participated in “Torch Teams” will present Liberty Replicas, complete with a heart made from authentic materials from the Statue of Liberty’s centennial restoration, to heroes they nominated from the community.

“The idea is real-world application of all the lessons they learn in the Super Citizen Program,” said Patti Yancey, Liberty Learning Foundation founder. “By studying the character of these heroes, they improve their own character.”

“Our kids need to know about our country, and they need to know why they should love our country and what has been sacrificed for us,” said Becky Baggett, PLAS headmaster.

“A lot of times our Torch Teams nominate people who have never seen themselves as “heroes,” Yancey said. “So the experience that happens when students bring them on stage is really exciting and humbling…for both the students and the heroes they honor.”

After presenting the heroes with their Liberty Replicas, each student received a certificate for completing the Super Citizen program. The students also recited a pledge to always hold true to being a Super Citizen.

“You are going to go from here today,” Yancey said to the students, “and take different paths in your life, but you will always be a citizen, a community member and a neighbor.”

Troy Elementary School’s Super Citizen graduation will be on April 28 and Pike County Schools’ will be on May 6 at Claudia Crosby Theater. 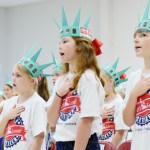 Students pledge to always be a Super Citizen. 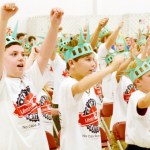 Students sing along to “Only You” to celebrate becoming a Super Citizen. 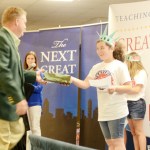 Cathy Stockstill presents a Liberty Replica to Jim Powell to thank him for being a local hero. 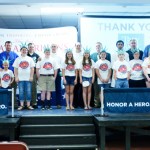 Pictured are the heroes with the students who presented their Liberty Replicas.