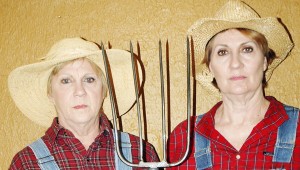 Messenger PHoto/Jaine Treadwell
Sisters Pat and Geraldine and friends will be featured in the “Country Comes to town country and gospel music concert at Studio 116 in Brundidge.

Sisters, Pat and Geraldine, will shed their aprons for overalls when “Country Comes to Town” at 7 p.m. Saturday April 25.

“Country Comes to Town” will be the second event in the Old Time Music Revival at Studio 116 in Brundidge.

Sisters Pat Rogers and Geraldine Golden will be in concert, singing country and gospel music with a little down-home humor thrown in for good measure.

The “Golden Girls” are not saying exactly what to expect at the “Country Comes to Town Concert” but, they come from a pickin’ and singin’ family. And those Sisters can sing.

“Geraldine sings better than I do so but I’m cuter and I harmonize real good, “ Pat said with a smile.

Geraldine said customers at Sisters Restaurant might have noticed that she and Pat have not been around the restaurant as much.

“That’s because we’ve been practicing for our concert,” she said. “Pat needs to practice.”

The Old Time Music Revival events are scheduled to last an hour and 15 minutes. An hour’s not long enough and an hour and a half is too long.

However, the Sisters said their repertoire would turn into a repeat-ertoire if they had to fill that much time so they are inviting a few friends to join them on stage.

“Our customers will recognize our backup singers but we’re not going to put their names on the marquee in case they back out,” Geraldine said.

“Country Comes to Town” will be the Sisters debut concert and Studio 116 is proud to welcome them to the stage.

“Geraldine and Pat are a lot of fun and people might be surprised at how talented the Sisters and their friends really are,” said Margaret Ross, an organizer of the event. “Admission is a donation in support of the Old Time Music Revival events.”

“We expect to have a large crowd to for the Sisters concert,” she said. “In May, the Old Time Music Revival will feature Shelia Jackson: ‘Spiritually Singing’ and, in June, we’ll have Bluegrass and Barbecue.”

The “Revival” is designed to revive interest in the old-time music of the South.

“Jazz Under the Stars” featuring the Troy University Jazz Ensembles at 6:30 p.m. Tuesday in downtown Troy will be the... read more