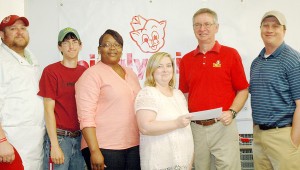 Piggly Wiggly on Highway 231 in Troy has long been a strong supporter of the Troy community. The food chain store is owned by Steve and Jennifer C. Garrett, and both are committed to their employees and to the people of Troy and Pike County.

“We are always looking for ways to recognize our employees and the make a contribution to the community,” Jennifer Garrett said. “We have a lot of very interesting and unique product promotional items throughout the store. Customers and our employees often comment that they would like to have some of those promotional items.”

“Of course, we can’t selectively let the employees have those items so we came up with a idea that would be fair to all our employees,” she said.

The idea was to have a silent auction and put the product promotional items on the auction block.

The items were on the auction block for four days, and employees could bid on the items of their choice.

The auction generated a lot of interest and raised $225. Dereck Wilhelm, Robyn Thomas, Shane Davenport and Wesley Best topped the bids and were the winners.

Dan Smith, Troy Parks and Recreation director, accepted the generous donation to the Troy Miracle League and thanked the Garretts and all of those who bid in the silent auction.

“We greatly appreciate the generosity and support of Piggly Wiggly 231,” Smith said. “We always need supplies for the Miracle League. The uniforms and equipment are supplied and this donation will be used for those things.”

Smith said Miracle League play got underway a week ago and will continue for five weeks.

“We invite everyone to come out and enjoy the Miracle League games,” he said. “The kids have a great time as do their buddies and other volunteers who help as we play the games.”

Garrett said she is considering continuing the product promotional items silent auction and opening them up to the public through facebook in the near future.

“The public interest is there,” she said. “The money raised would be donated to charitable organizations, and the winners of the auction would get some really neat promotional items. The auctions would be good all around.”

Dorothy Howard, left center, has worked with expecting mothers in Troy for 10 years. Howard stands with some of her... read more