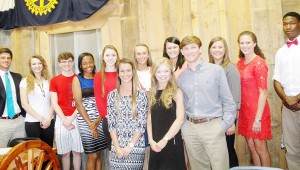 The guests were the nominees for the Brundidge Rotary Club’s annual scholarship program and represented five area schools.

Rotarian Chip Wallace, who chairs the club’s scholarship program, said all nominees are outstanding, not only academically, but they also excel in athletics and are leaders on their respective campuses and in their communities.

“We have another outstanding group of nominees for the scholarships our club sponsors annually,” he said. “As always, it will difficult to decide which six will be awarded the scholarships.”

Most of the scholarship nominees plan to attend either Troy University or the University of Alabama.

“This is a very talented group and one with varied interests,” Wallace said. “We have a classical guitarist, a Hospice volunteer, teacher assistants, cheerleaders, cloggers and a bell ringer for the Salvation Army,” Wallace said. “They are talented and they are serious about their career choices.”

The future plans for the 13 scholarship nominees are just as varied as their talents and interests, Wallace said.

One nominee wants to get a degree in mechanical engineering and design roller coasters. Another wants to be a lawyers and another wants to eventually return to the family farm.

Several nominees want to be teachers and nurses. One nominee has plans to be an OB-GYN while another plans to be an athletic trainer. One nominee aspires to be a screenwriter and director. However, those plans could change as the scholarship nominees move into the next phase of their young lives, Wallace said.

“We wish them all success and happiness in whatever career paths they choose.”

All were longtime Brundidge Rotarians, except Spano.

“Rotarian Larry Shiver sponsors that scholarship in memory of a Georgia teacher who was a great influence in his life,” Wallace said.

The Brundidge Rotary Club Scholarships are awarded in the amount of $1,000 and to the college of each recipient’s choice.