Local students act in ‘To Kill a Mockingbird’ play 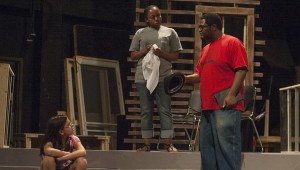 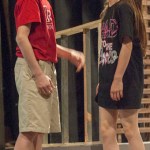 Jean Louise “Scout” Finch and her older brother, Jem, live in a small Alabama town. They, along with their friend, Dill, spend much of their time spying on their mysterious neighbor, Boo Radley.

But, when their lawyer dad, Atticus Finch, defends a black man against fabricated rape charges, the children are exposed to the evils of racism and stereotyping.

Tate Gardner, who plays Scout in the upcoming Troy University stage production of “To Kill a Mockingbird,” knows the plot of Harper Lee’s award-winning novel. And, she understands that it’s about “doing the right thing and treating people right.” She also knows that “being in this play is the best thing ever.”

For Gardner, having a lead role in a “big play” is a big deal and it’s a big opportunity for the Pike Liberal Arts School fourth-grader who aspires to, one day, be an actress.

Gardner’s prior stage experience had been limited to a few lines and a song in the Troy University production of “A Midsummer Night’s Dream” and Summer Spotlight Camp at the university.

“I really wanted to do this,” she said of ‘To Kill a Mockingbird.’ “I thought it would be fun and I would learn a lot. It’s taken a lot of work but I’ve love being in the play and I really love playing Scout. She’s not at all like me so I’ve had to learn to be her.”

Gardner said Scout is a feisty little girl who would beat up boys if they said anything bad about her dad.

“Scout is a ray of sunshine that can turn into a fireball,” Gardner said, laughing. “She’s kind of bratty. She’s hardheaded and does what she wants to do. She real curious and asks a lot of questions. She talks real country and wears boots and overalls. I’m not like that at all.”

Gardner described herself as neat, mild mannered and soft-spoken.

“Kind of sweet, I guess,” she said with a smile.

Gardner said she had a lot of lines to learn and a lot of “keys and cues.” She had to learn to speak loudly, “almost yell.” But all of the hard work paid off.

For Gardner’s understudy, Claire Ann Manning, becoming Scout Finch was not such a big switch.

“Claire Ann is feistier than I am,” Gardner said, laughing.

Manning, who is also an alumnus of the Troy University Summer Spotlight Camp, agreed.

“I’m loud and some people say I’m crazy,” she said, laughing. “I have two older brothers and I’ve played a lot with boys so I’m kind of a tomboy. I like to go out on our land hunting and fishing. I shoot my BB gun. I’m probably more like Scout in that way than Tate. But we both like being Scout.”

Manning, a sixth-grader at PLAS, has read “To Kill a Mockingbird” and really liked the book and she really likes the play. It makes the story real, she said.

“I’ve worked really hard learning my lines and it’s been fun to watch all the other actors,” she said. “I’ve learned a lot from watching. I have a lot of time to sit and wait and I use that time to run my lines.”

Manning will play Scout on Thursday night and she said all of the time and effort has been worth her one night in the spotlight.

“For one night, it will be amazing to be Scout,” she said. “I’ve worked hard so that when it’s my turn to be Scout, I’ll have it all right.”

Dalton Causey, who plays Jem in the university stage production of “To Kill a Mockingbird,” is a Spotlighter and also has a lead youth role in Alabama’s Official Folklife Play in Brundidge. So, the Ariton middle school student feels rather comfortable on stage.

“When I got the letter about audition about the play, I wasn’t sure I wanted to do it,” Causey said. “But, I auditioned and got the role and I fell in love with the play.

Causey and Jem are alike in “gentlemanly” ways, he said.

“Jem’s a lot like his dad, Atticus,’ Causey said. “His dad is a gentleman and he’s respected in the community. I’m more like a gentleman but Jem plays football, too, and shoots an air rifle. I’m quiet, though. I read a lot. I’m artistic. I’m like Tate; I had to learn to leave the ‘ings’ off words so my talking would sound more country. I had to learn to be more like Jem so I’m a work in progress.”

Tripp Spivey, a PLAS sixth-grader, is Jem’s understudy. He, too, is like Jem in some ways and, in other ways, he’s like him only on stage.

“My favorite part in the play is the mad dog scene,” Spivey said. “That’s real exciting to me because I like to be active. The whole play has been an exciting adventure so I’d like to do this again or maybe another play.”

Dill is not a major character in the play but, he is an interesting young, fatherless fellow. He is a friend of both Scout and Jem and is adventurous, humorous and a bit of a troublemaker.

Goshen Elementary fourth-grader Brady Singleton plays Dill and he said that he, too is adventurous and humorous, but stopped short of saying he’s a trouble-maker.

“Dill was inquisitive and I am, too,” Singleton said. “It’s fun to play him and I try hard to be just like he would be.”

“I’ve been to summer drama camp but this is the first time to be in a big play,” he said. “But I might want to be an actor when I grow up.”

Singleton said he has already found that acting is a lot of hard work.”

“Practicing has been fun and I love it,” he said. “But the hardest part is remembering my lines. There are a lot of other things to learn, like when to go on stage and where to go.”

But dressing as Dill is no problem for Singleton. He is wearing Converse shoes, kaki shorts and a red and blue shirt and suspenders, of which he is very fond.

“I love practicing and hanging out with my fellow actors,” he said. But sometimes I get so tired I want to fall out and go to sleep on the stage.’

Bryce Senn, who attends Charles Henderson Middle School, is the understudy for Dill. Bryce is a rather seasoned young actor. He has attended Summer Spotlight Camp at Troy University and has several seasons with “Come Home, It’s Suppertime” to his credit.

“It’s been a huge honor to be in such a big production as ‘To Kill a Mockingbird,’” Senn said. “Working with Mrs. Tori (Averett, director) and all the others has been awesome. They have really helped with my ability to act. I want to give a big thanks to all of them for this opportunity and their help.”

Senn said Dill is “basically me.”

“Dill is outgoing and unpredictable,” he said. “He has a lot of energy. He’s hyper. He’s me. I’ve worked hard and I’m excited and ready for the production to start.”

Tori Lee Averett, Troy University Department of Theater and Dance chair and play director, said all of the children have been dedicated to the play and displayed an outstanding work ethic.

“All of their hard work will come to fruition next week when they take the stage before an audience in ‘To Kill a Mockingbird,’” she said.

THY CROSS I’LL CARRY: The legend of the Jerusalem Donkey

The Christian donkey or the Jerusalem Donkey. The cross on the donkey’s back is widely thought to be from the... read more