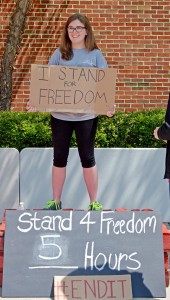 Angie Lewis, president of Troy Voice of Justice, stands for freedom during the fundraising event.

Troy students took a stand for freedom on Wednesday.

More than 200 students, along with about 15 members of the Troy Voice of Justice, a Troy University faith-based organization fighting human trafficking, took a stand for freedom, by participating in the International Justice Mission’s Stand for Freedom fundraiser event, where each person can raise money for each hour he/she stands.

International Justice Mission (IJM) is a force that also works to prevent violence and human cruelty all over the world. They partner with local governments and communities and fight from the inside.

“I’m passionate about this because I was sexually abused when I was young,” said Angie Lewis, Voice of Justice president. “So, I know a fraction of the pain that human trafficking victims go through. Just that fraction makes me passionate enough that I want to do something to make a difference in somebody else’s life because I know what it’s like to not have a voice. That’s why Voice of Justice was established: to give those who don’t have a voice, a voice.”

I-20 is America’s number one road for human sex trafficking, according to The Wellhouse. It is on this road that pimps take their victims all over the country, and post them at truck stops to sell themselves.

“I fight it because I feel like it is something God has laid on my heart and it is something that needs to be stopped,” Lewis said. “We can stop it by saying no to pornography and other forms of commercialized sex. It just takes people brave enough to stand up and say ‘I won’t stand for this’ and say ‘I stand for freedom.’ It doesn’t just affect little countries like Africa and Europe. It affects the United States, too. Lives shouldn’t be stolen from anybody.”

According to Lewis, 40 states and 10 countries are participating in Stand for Freedom this week.

“We didn’t want this to just be for college students,” Lewis said. “We wanted it to be for families and the citizens of Troy to come out and bring their kid to. Yes, it’s a tough subject that kids shouldn’t even learn about, but they need to know. They need to be taught at an early age. Child abuse awareness is a big part because it doesn’t start as an adult. The average age of a girl to go into prostitution is 12 years old.”

Voice of Justice has been working since November 2014 to make this event a big one. From 8 a.m. Wednesday to 8 a.m. Thursday, they have events planned for Troy University students and the rest of the community to get involved. From 8 a.m. to 5 p.m. Wednesday, passersby participated by standing on platforms, signing a petition that will be sent to Congress from IJM and praying for those who are trapped in slavery and for those who are binding the chains.

“The petition will show Congress that people care,” Lewis said. “It will provide help for those who are in human trafficking and prostitution and it will strengthen laws to prosecute the pimps and johns. People are starting to change their opinion about how they look at prostitutes, but people are now starting to see that it’s mainly the prostitutes that are getting put in jail and not the pimp or the person buying sex.”

The platforms that students were standing on were wooden pallets that were painted red.

“Normally when you think of wooden pallets, you can associate it with shipping,” Lewis said. “Victims of human trafficking are shipped especially in foreign countries. They are transported by boat, train, vehicle and airplane. It happens everyday in America, too, just like that.”

To follow, students and the community joined Voice of Justice on the main quad at Troy University at 7 p.m. for worship with the Baptist Campus Ministries worship team and The Vine Church and guest speaker Ellis Bush, who spoke on the gospel and God’s heart for justice. Worship concluded with a prayer walk around the campus to pray for specific countries.

As a conclusion of the event, at 8 a.m. today participants released 30 balloons to represent the estimated 30 million victims of modern day slavery.

Troy Voice of Justice hopes to raise $1,000 for IJM, and they will know their final amount at the end of the month. They are competing with the IJM chapter at the University of South Alabama to see who can raise the most money.

“We thought it would be a good idea to have a friendly competition with them because Troy University and South Alabama are already rivals when it comes to football and any other sport, so why not make it rivals in raising money for a great cause?” 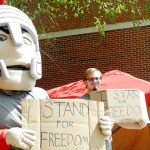 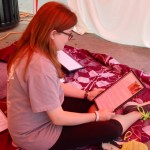 Angie Lewis, president of Voice of Justice, spends time in the prayer tent, praying for human trafficking victims around the world. 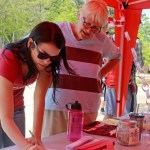 Amanda Lewis signs the IJM petition during Stand for Freedom. 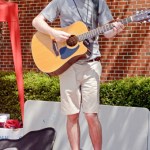 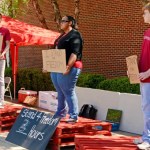