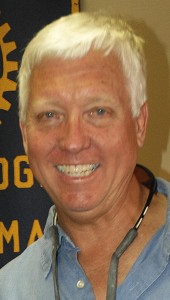 When Carter Sanders left his native Goshen to grow cacao in Ecuador, local folks were curious as to why Sanders would want to go all the way to Ecuador to raise cows.

Sanders, laughing, told the Brundidge Rotarians that ca-cao is chocolate, not cow as many people misunderstood.

Sanders was the program guest of Rotarian Dixie Shehane at the Wednesday meeting of the Brundidge Rotary Club. Sanders has purchased 200 acres in a prime location in Ecuador on which he planned to raise cocao, which is the main ingredient in cocao butter and fine chocolate.

His property is near one of the world’s largest rain forests and near the headwaters of the Amazon River. If he wakes before the humidity overtakes the horizon, he can see an active volcano at the confluence of he Napo and Pasuno Rivers. The temperature ranges from a “blistery” 85 degrees on sunny days to a comfortable 65 degrees at night.

That sounds a little like heaven and Sanders said, it’s close.

“Ecuador is a beautiful country and I plan to split time between Pike County and Tena, my home in Ecuador,” Sanders said. “So, I say that I’m bi-hemispherical.”

But turning his 200-plus acre property into a home away from home, has taken Sanders on an arduous journey through miles and miles of red tape of things he can and cannot do and when he can do them.

“At first, to reach my property, I had to take a water taxi,” he said. “For a while, the was rather romantic. But when I had to start transporting building materials across the water, it was no longer romantic.”

Sanders purchased property from a neighbor to build a roadway to his property but building the roadway has been time consuming and costly. And, his property is not yet easily accessible by land.

“There was a five bedroom house on the property when I bought it but it had not been lived in for several years,” he said. “I’ve had quite a bit of renovation work to do and I didn’t get electricity until after I came home on this trip. So, I’ve not seen the ‘light’

With 70 percent of the world’s fine chocolate coming from Ecuador and a projected worldwide shortage of a million metric tons by 2002, Sanders thought a cocao plantation would make his investment in Ecuador a wise one.

However, the shrinking export market is giving Sanders reason to reconsider.

“There are no seasons in Tena, Ecuador,” he said. “So, I could get two and half to three corn crops a year. So, I’m looking at growing corn in Ecuador. I’m also considering balsa wood, which could be cut in four years. And, there’s gold to be mined.

“And chickens and tilapia will feed the world in the coming years. A steady temperature between 65 and 85 degrees would be idea for poultry farming and there’s a lot of water for fish farming. So, I have a lot of options.”

And, Sanders is not opting out of chocolate.

For him, living country to country is an exciting and interesting way to live, cocoa or not.

In response to the question, why leave home for a distant country, Sanders quipped, “You only live once.”

Leigh Grissom, standing, tells about the benefits a facial has for the skin while Brittany Dozier Royal gives a facial... read more