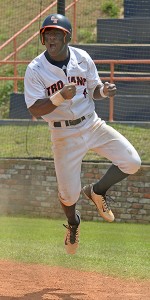 CHHS’ Bryson Gandy celebrates after stealing home during the Trojans game against Muscle Shoals on Saturday. The play was part of a seventh-inning rally that tied the game and gave the Trojans the momentum needed to win.
MESSENGER PHOTO/THOMAS GRANING

The Trojans of Charles Henderson High School took three wins over three strong opponents this past weekend, improving their record to 28-2 on the season, but focusing now on a pivotal Class 5A, Area 3 matchup against the always-tough Rehobeth Rebels.

CHHS began the weekend with a 13-4 win over defending Class 2A state champion Houston Academy, came from behind for a thrilling 5-4 win in the bottom of the eighth against Class 6A power Muscle Shoals, and Saturday night faced and defeated a Florida State pitching commitment in a 9-4 win over Paxton, Fla.

“We had a great weekend with three wins over three solid programs,” said CHHS Head Coach Derek Irons. “We faced great pitching and competed well enough to win. This team has responded well to every challenge that it has faced.

“We’ve done some great things so far, but the reality is we haven’t even guaranteed ourselves a home series in the first round in the playoffs. We want to win a championship every time we can, and this week we have a chance to win an area championship. Rehobeth is having a great season and is ranked in the top ten in 5A as well, so it should be a good series.”

Rehobeth and CHHS are both undefeated in Class 5A, Area 3 play, while Rehobeth stands at 16-6 overall entering Tuesday’s 5 p.m. game in Rehobeth. CHHS is ranked No. 1 while Rehobeth is No. 7.

The two teams will meet again on Thursday in Troy for a double-header also beginning at 5 p.m.

Over the weekend CHHS defeated Houston Academy 13-4 behind a six-hit pitching performance by Reilly Fox, who struck out five over as many innings. Jason Fleming worked the final two innings, allowing only two runs on five hits and striking out three.

DeAndre Pitts had two doubles and a triple, while Fox, Smartt and Hunter Reeves had two hits each. Austin Ingram had one hit and three RBI, while Chase Hartley also had a hit.

CHHS trailed Muscle Shoals 4-1 entering the bottom of the seventh inning but with the score 4-3 and two outs and two strikes on the batter, Bryson Gandy stole home to everyone’s surprise to tie the score at 4-4.

In the bottom of the eighth inning Hartley doubled and later scored on a sacrifice fly by Reeves for the 5-4, extra-inning victory.

Hartley led CHHS at the plate with two hits, while Nick Lewis, Fox, Smartt, Ingram, Cole Wilson and Gandy had one hit each. Smartt also had two RBI.

Paxton led 3-1 but the Trojans rallied for five runs in the bottom of the third inning off Stewart to go up 6-3, and added three more in the sixth en route to the 9-4 win.

Lewis, Pitts and Fleming had two hits each, while Fox, Smartt, Jackson Murphy and Ingram had one hit apiece.

Pitts had five hits over three games, while Fox and Smartt had four apiece.