Manager shows thanks to police and firefighters 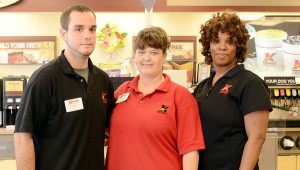 A free cup of coffee goes a long way when trying to say, “thank you.” Kimberlee Messer, manager of the Kangaroo Express on U.S. Highway 231 gives a free cup of coffee to each police officer and firefighter who enters the store, with no limits on how many they get.

“I really appreciate their service,” Messer said. “They go above and beyond to make my staff feel safe here.”

Messer comes from a family of firefighters. Her father was a fire chief, and her grandfather was a volunteer fireman.

“I know what those guys are going through,” she said.

Messer has been the manager of the Kangaroo Express for five years, and she has been giving the police officers and firefighters free coffee ever since taking over. Before managing the Kangaroo in Troy, she worked at a Dothan store and noticed a difference when she moved to Troy.

“I’ve never seen a group of young folks come together as one, even when they don’t have to,” she said. Whenever she or her staff has felt threatened or has been short-handed, Messer said that they would provide extra patrol, no questions asked.

Messer said that Troy has a unique group of officers and firefighters that will go out of their way to serve the community, unlike other towns. When they come into the store, she said they call her by name, and that makes her feel special.

“We just want them to know that they are just like our family and are welcome here anytime,” she said.