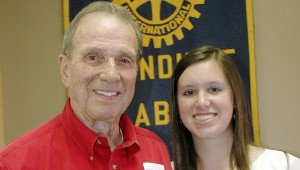 Messenger Photo/Jaine Treadwell
Elana Strother was the program guest of her granddad, Rotarian Lamar Steed, at the Wednesday meeting of the Brundidge Rotary Club. She shared information about her mission trip to Costa Rica in December.

If Elana Strother had a million dollars, she would bag it up to share with the people of Costa Rica.

The Pike Liberal Arts junior participated in a December mission trip to Costa Rica that was led by First Baptist Church of Troy. Strother said it was such an incredible experience that she holds a place in her heart for the people of the poverty-stricken areas of the Central American country.

Strother was the program guest of her granddad, Rotarian Lamar Steed, at the Wednesday meeting of the Brundidge Rotary Club. She shared the mission of the trip and then a photo gallery that continued to tell the story of the team’s experiences in Costa Rica.

The purpose of the five-day mission trip was to take Christmas boxes to the children in the village Jose and Leda Villalta serve as missionaries, Strother said. FBC provides financial support to the Villalta ministry.

Strother said the Christmas boxes are similar in purpose to that of Samaritan’s Purse’s Christmas shoebox ministry.

The church membership packs boxes for Operation Christmas Child and for the mission to Costa Rica.

“Each member of the mission team was also asked to pack 10 boxes with items like bouncing balls, toothpaste, soap, things that the children would play with and things they could use,” Strother said. “While we were in Costa Rica, we played games with the children and had treats for them. We visited two orphanages and visited people in the village.”

Strother said many of the people were extremely poor and their living conditions were primitive.

“Their houses had dirt floors and they slept on cots,” she said. “They didn’t have anything much at all.”

The team members stayed with the Villaltas and their living conditions were better.

“They had one shower but with no hot water,” Strother said. “We had rice and beans to eat almost every meal. So, if you don’t like rice and beans, don’t go to Costa Rica.”

But the mission team was not in Costa Rica to enjoy the comforts of home. Strother said they were there to spread God’s word.

They had many opportunities to spread God’s word as the played games with the children, shared treats with them and visited in the orphanages and in the homes.

“We went to the homes with invitations to a big party we were going to have for the people who live in the area that Jose and Leda serve,” Strother said. “We had made gift bags for about 500 but, when we got there, we made more just to make sure we had enough.”

Five hundred and more came to the party and it was the story of a child that summed up the entire mission trip.

Strother said one child asked for an extra invitation so he could bring an ailing friend.

“Even though they didn’t have anything much of their own, they still cared about others,’ she said. “That’s why I want to share what I have with them.”