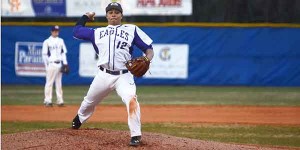 Ty Witherington is set to be on the moun for the Eagles in their upcoming match up against the Elba Tigers at home Friday afternoon, head coach Robby Kinsaul said.
MESSENGER PHOTO/JOEY MEREDITH

“As a whole, it’s kind of picked up here recently,” Kinsaul said. “We’ve been playing better baseball right now, which is the time you want to do that.”

Kinsaul said the Eagles, who are 3-0 in the region and 6-10 overall, started off the season with stiffer competition facing 6A and 7A teams. But that put the team in a position to be more competitive as it moved into area play.

Kinsaul said the team’s change in competitiveness and strengths couldn’t be attributed to one single thing, but instead could be contributed to 14 things.

“I’ll say this for our guys, they compete and battle for each other,” Kinsaul said. “Our motto is ‘Fourteen Strong.’ We have 14 players and they all play for each other.”

And, Kinsaul said the team would hopefully take the saying to heart Thursday heading into the Eagles’ area matchup against the Elba Tigers.

“Of course you want to win more than you lose, but the ones that count are the ones that we’re focusing on the most and that’s the area games,” Kinsaul said. “Our area is one of the toughest areas in this part of the state. I know Zion Chapel had three seniors back and one junior who throws the ball really well. Elba has basically their whole team back from last year.”

Kinsaul, however, is not deterred. Coming into the game, Kinsaul already has a plan for his pitchers and knows he’s got a good thing going.

“Bryant (Stephens) will be starting on the mound Thursday, and Ty Witherington will be starting game two on Friday,” Kinsaul said. “That’s one thing that helped us at Zion Chapel. They were both able to throw complete games. We have some younger guys behind them that have been getting some work in. Braxton Stewart has been getting some work in. He’s a junior and has been throwing really well. Some sophomores have been throwing really well. Hunter Williams, Adam Turner, all those guys have been throwing the ball well.”

Kinsaul said the biggest challenge Thursday would be the team’s ability to finish.

“We want to just get the guys to finish,” Kinsaul said. “We had some unfortunate breaks that went our way last year, and we still had a chance to win the game, but it just didn’t happen that way. I’m trying to get them to focus for seven innings, staying focused on every pitch.”

For the Eagles, playing clean baseball is what it will take going against the Elba Tigers Thursday and to make it into the playoffs.

“Of course, we want to win these games, but I want our guys to win it for our seniors,” Kinsaul said. “We do a lot for them as well as we do for every other player on the team, but I want so bad for them to get themselves into the playoffs. It’s going to be tough. Our area is very tough. We were fortunate enough to play well against Zion Chapel, and I’m hoping we’re fortunate enough to win against Elba.”