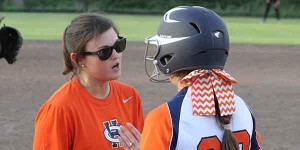 The Elba Tigers built an early lead that was too big for the Lady Trojans of Charles Henderson High to overcome as CHHS rallied in the late innings but came up short 9-8 Tuesday in Troy.

CHHS Head Coach Heather Mitchell said she was very proud of the way the Lady Trojans fought back, but she said the team must play good ball a complete seven innings to win close games.

“One thing that we talk about a lot is being mentally tough, and it doesn’t matter what is going on outside the two white lines on the field, it’s what happens in between those lines,” said CHHS Head Coach Heather Mitchell. “We must control what we can control. Today we did fight back, and controlled what we could control in the last four innings, but not the first three innings.

“We did not have a lot of discipline at the plate, we had some errors in the field. Not one person contributed to the loss, but for us it’s a team thing, and today we were not mentally tough.”

CHHS cut the lead to 5-3 in the bottom of the third inning as Lindsey Fox doubled, Lakin Turner walked, Hannah Calhoun reached on a bunt single, Fox scored from third on a wild pitch, and Molly Kate Sanders drove in two runs when she put the ball in play and was later called out at first, but not until the Lady Tigers threw the ball around allowing Turner and Calhoun to score.

Elba tacked on two more runs in the top of the fourth inning for a 7-3 advantage, and the Lady Trojans got one back in the bottom of the stanza as Emma Kirkpatrick banged a double deep to right-center, Tucker Earles singled and Kelsey Gibson dropped a bunt single to score Kirkpatrick.

Elba went up 9-4 in the top of the fifth with two more runs, and CHHS cut the lead to 9-7 in the bottom of the same inning.

Turner, Calhoun and Sanders each reached on bunt singles, Sidney Armstrong and Kirkpatrick drove in runs with singles, and Earles drove a deep fly to score Armstrong for the 9-7 score.

The final run for CHHS came in the bottom of the seventh as Armstrong reached on an infield single, Kirkpatrick doubled and Armstrong scored on a hard hit ground out by Earles for the 9-8 score, which Elba held to be the final.

While the Lady Trojans dropped to 9-10 on the season, Coach Mitchell expressed how proud she is of the progress they have made, especially being a young team. Of the 13 girls, there are no seniors, two juniors, three sophomores, five freshmen, two 8th graders and one 7th grader.

“When I first met this group of girls last year, we didn’t have any grit,” Mitchell said. “When something went opposite of what we thought, we just laid down. As you can tell today, we are getting some grit. We’re getting there. The score is not what we wanted today, but I am proud that we kept fighting. We found ways to make plays that they could the other team could not make, and that’s how we scored our runs.”