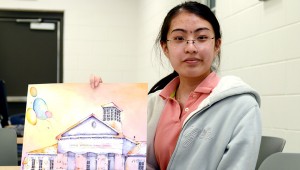 Messenger Photo/Ngoc Vo
Demi Huynh, an eighth-grader from Charles Henderson Middle School in her art class. Huynh recently has been recognized by Troy City Schools for her watercolor painting titled “My School.”

Huynh recently participated in the statewide Visual Art Achievement program with a painting of her school. “My School” was originally a class project before it was submitted to the regional contest, Huynh said.

“We were supposed to go outside of the school to draw what we saw,” she said. “But it was raining so we just stayed in and draw from a photo.”

Huynh said she started the painting with pencil drawings, then shading with pens before she put on watercolors. The finished work impressed not only her teacher but also school leaders and school board members, who now have a framed print hanging in the central office.

Huynh said she has been drawing since she was 3 years old.

“I began with copying my older sister’s doodles because for some reason I didn’t know what drawings of people look like,” she said. “Then I eventually started drawing on my own.”

Huynh said she spent a lot of time on her own and she would paint to entertain herself when she had nothing to do.

“I enjoy drawing with pencil the most, but if I have the materials I also use watercolors,” she said

“I don’t like to go rough, go too dark or too hash,” she said. “I am training myself to use primarily happy colors.”

Her favorite thing to draw is people. “I like the aesthetics and proportional aspect of human anatomy,” Huynh said. “I haven’t really studied human anatomy but I have noticed a lot of things when I look at photos.”

Huynh said she enjoyed drawing still people and she said she often asked her family members to model for her paintings.

While she enjoys painting, Huynh said she plans to pursue a career as a veterinarian. “I practically squeal every time I see an animal,” she said. “Another reason is that I have seen animal cruelty and I want to fix that. If the animals are pets, basically their lives are dependent on the owners.”

Huynh said although she planned to pursue a career as a veterinarian, she would still maintain her drawing hobby.

Her painting “My school” is currently on display at Alabama Artist Gallery at the RSA Tower in Montgomery.