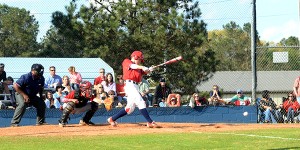 For any team, when you’re down and out you stay out, but not the Pike Liberal Arts Patriots.

The varsity Patriots faced off against Abbeville Monday in a battle of a contest with the Patriots losing 10-9 against the Generals. But, head coach Allen Ponder said the team had a bit to work on before heading to Escambia.

“Today was just another example of our inconsistency as a baseball team,” Ponder said. “We’re one of those teams when it’s a big game or a region game, we show up and play a great game but when it’s not a region a game and it’s a game that doesn’t matter to us in terms of state and playoffs, we don’t bring the same enthusiasm and intensity. That’s just another hump we’ve got to get over.”

Coming into the fourth inning, the Patriots were down 6-0, but did not allow themselves to get defeated entirely, characteristics of the team Ponder is more than proud of.

“We’ve started doing a much better job of battling,” Ponder said. “There were positives in the game, and we’ve done a much better job as of late of battling for runs when we’re down in a game. We didn’t lay down today, we fought back. And, the good thing about it is we had a chance to win in the end.”

Ponder said the team had been able to come back to tie the Generals with the tying run on third and the winning run on second, but the team wasn’t able to capitalize ultimately losing the contest against the Generals.

However, Ponder said he had told the team to “put it in the rearview,” as the team readies to play region foe Escambia.

“Every game we play from here on out, we’re just looking for that consistency,” Ponder said. “Against a team like Escambia, we played them the first region game of the year and that was big for us because that put us at 1-0 in the region. But, now moving forward to this game, we aren’t going to take them lightly.”

Ponder said he knew Escambia had grown as a team since their last meeting, but like any coach he hopes to come back with a win.

Opposite of their counterparts, the junior varsity Patriots made quick work of the Abbeville run ruling the Generals 15-0 in the fifth inning.

Junior varsity head coach Jason Williams said he was proud of his team and impressed at the level the team was playing at now compared the beginning of the season.

“I was really proud of the guys,” Williams said. “We had spring break last week, so we had a layoff right here, but we came out and swung the bats a lot better than the last time we played these guys. Last time, we came out to a slow start, but my starters came out and hit pretty well.”

Williams said that each of his starters had been able to hit several times within the first few innings of the game, and later the coach pulled his starting line up in hopes of not running up the scoreboard.

Pitching for the JV Patriots, Williams accredited Wood Jinright with three shutout innings allowing only one hit during his time on the mound, and Holt Steed who came in and closed the game for the Patriots and got three outs for the team.

The JV Patriots will not be traveling to Escambia, but will instead travel to Glenwood Thursday to face the Gators.