After 25 years, well-known forester hanging up his hat 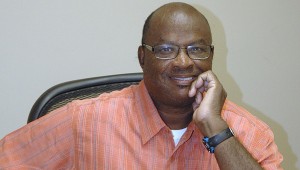 Messenger Photo/Jaine Treadwell
Jeremiah “Bull’ Rodgers officially retired from the Alabama Forestry Commission Monday. Rodgers had been with the commission for 25, serving as a forestry worker, forest ranger and as specialist. As Smokey Bear, he was popular with young students and a favorite at local parades.

Rodgers was “roasted” at noon by those with whom he has worked and friends and family. It was a fun way to bring to a close what, Rodgers said, has been as rewarding as any career he could have imagined.

Rodgers started working with the Alabama Forestry Commissioner as a forestry worker, then was promoted to forest ranger and then to specialist.

“I grew up on the east side of the county and right near the Barbour County line,” Rodgers said. “I worked for the City of Ozark for a while and did some farm work. A friend said I might want to check in to working for the Forestry Commission. I started hanging out around there and, when a job came open, I applied.”

Wayne Craft was Rodgers’ supervisor when he first went to work for the Alabama Forestry Commission.

“He was a big help to me,” Rodgers said. “There was a lot to learn and he was always willing to help me along. I appreciate all he did for me.”

“I worked with people all over the county and I had a good working relationship with all of them. I respected them and they respected me. In all those 25 years, I never had a disagreement with any of them.”

Pike County is made up of 643-square-miles and that’s a lot of coverage miles.

Rodgers remembered the biggest and most frightening fire he fought.

‘It was over in Bullock County around Blues Old Stand. A tract of about 400 acres was burning,” he said. “Fire was all up in the trees. It was time to be a little scared.”

Wild fires and rattlesnakes were the primary dangers of the job but Rodgers said he only saw a few poisonous snakes.

“The snakes were there; we just didn’t see them,” he said, with a smile.

And, not many people know that Rodgers often made appearances as Smokey Bear. He took the forestry commission’s slogan “Don’t Play with Matches” to hundreds of children at schools and parades.

“I enjoyed seeing the reaction of the children,” he said. “Some of them would be scared of Smokey Bear and others would come right up and hug Smokey. I was proud to be Smokey Bear. I enjoyed every part of my job for 25 years. But, I decided that was long enough. It was time to let somebody else have the opportunity that I had.”

“I’m just going to wait and see how I like retirement before I think about taking another fulltime job,” Rodgers said. “I’m enjoying not have anything that I have to do. I’ve got grandchildren I want to spend more time with and other members of the family. I want to see what retirement is all about.”