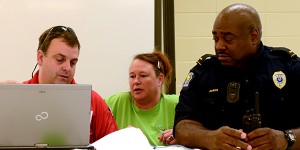 Detective O’Hara and Officer Jerkins with Troy Police Department receive instructions on what to do next when entering in the record information for the new Computer-Aided Dispatch system.
MESSENGER PHOTO/SCOTTIE BROWN 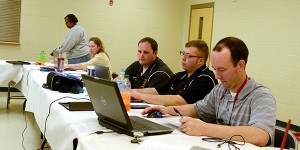 First responders and law enforcement officers across Pike County have been training this week to use the new Computer-Aided Dispatch system.

E911 Director Chris Dozier said representatives from different agencies across the county were learning the benefits of the newly updated system and inputting the information required for the new software to work.

“We are on a learning curve right now,” Dozier said. “We are learning how it works and making it do what we need it to do.”

This critical phase of the installation includes added detailed information about the county and the responders’ systems.

For example, some of the information being put into the system includes landmarks, such as McDonald’s on U.S. Highway 231 or the Pike County Health Department. Dozier said once the landmarks are entered, the CAD software can access information about the location, including previous calls received for that address.

“You’ve got the others putting in the call guides,” Dozier said, explaining those guides include the call signals used by the departments for incidents, such as a 10-50 for a wreck.

And, with only a limited amount of the information added, Dozier said officials already have begun to learn the ins and outs of the software.

“If we need to have the system send a text out, it’ll have all the information as far as the numbers and everything,” Dozier said. “We are also creating groups that are in the system. I have Troy PD as one group. I’ve also got their ERT Team grouped for a call out, that way they don’t have to sit there and call each one individually.”

With the new system, information can be gathered immediately with the touch of one button placing officers on scene, en route and even off the scene.

Another aspect of the system includes record management, which Dozier said will keep track of evidence entered into the system as well as the process of the investigation.

“It basically handles all of the paper files, reports, warrants,” he said. “It handles the entire investigation process from the time a report is taken until either an arrest is made or a case is solved.”

While multiple officers from each department are helping input info, eventually access will be limited, Dozer said.

“Right now, we do have a lot of people putting stuff in, but when we go live, we’re going to have to limit down who all can go in and change all of that stuff because of security issues,” Dozier said. Each participating department – Troy Police, Pike County Sheriff and Troy Fire – will select one representative for access.

And, while spending your days putting information into a computer isn’t the most fun any of the law enforcement officers and dispatchers will be able to see the benefits from the update system soon enough, Dozier said.

“There are a couple of things that we’ll benefit from with this new system,” Dozier said, adding that responder safety is a key factor. “It’ll just increase the efficiency of the operations overall … because we will have a true CAD system now that will have all these options.”