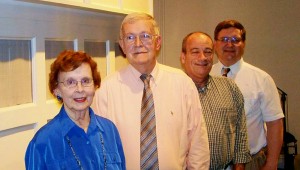 The Troy Music Study Club met Monday night, March 23 in the sanctuary of the First United Methodist Church for an organ recital with the Special Events Committee as hospitality.

The president, Lyndia Dew called the meeting to order and welcomed the members and guests. She led the repeating of the Federation Collect. Bill Denison, choral director, led the singing of the Federation Hymn and the “Together We Sing” song accompanied by Lyra Crapps. The March TWS song, “Down By the Riverside,” a traditional gospel song, was introduced by Betty Chancellor. Music in Poetry chairman, June Kendrick, gave a short biography of Maya Angelou, lecturer, poet, singer, dancer and recipient of many honors. Kendrick then read “Human Family” by Angelou.

Reports were given by officers and the committee chairman during the business session. The president reminded the nominating committee to report a new slate of officers for 2015-2016 at the next meeting. She also reminded the club members of the AFMC Convention April 17-18 in Huntsville to which the Spanns are attending and will take items from the club for the silent auction for scholarships. The president also called attention to the fact that the Troy Music Study Club will be 110 years old in October and to think of ways to celebrate. Members were asked to bring refreshments to the April meeting, which is Young Artists in Troy, and will be open to the public.

Coordinators of the program were Lyra Crapps and Bill Denison, who planned the organ recital. The following program was presented:

Following the program, the Special Events Committee of the Music Club composed of Joyce Dix, Betty Chancellor and Lyndia Dew served refreshments in the Round Room.

The next meeting of the TMCS will be Monday night, April 27, in the fellowship hall of the FUMC.

The Mose T exhibit as ‘Dr. Doug’ sees it