The Mose T exhibit as ‘Dr. Doug’ sees it 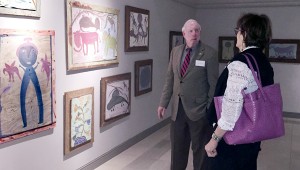 Submitted photo
Dr. Doug Hawkins of Troy gave a gallery talk at the opening of “As MoseT Would See It: Expressions Through the Life of Moses Tolliver.”

Dr. Doug Hawkins was just himself.

He told a joke or two and then settled back to talk about his friend, the late Moses Tolliver, and his artwork.

Hawkins gave a gallery talk at the opening of “As Mose T Would See It” Sunday at the Tennessee Valley Art Museum in Tuscumbia. The exhibition is Hawkins’ collection of Tolliver’s artwork.

Hawkins had admitted that he might be a little nervous being in the catbird seat. But, if he were, Wiley White, Johnson Center for the Arts development coordinator, said no one knew but him.

“Doug was very casual about his collection and talked straight to the audience. He connected with the audience right away,” White said. “His talk was interesting and entertaining and he had a very good audience. They were all knowledgeable about MoseT and about folk art. After the gallery talk, they asked questions and then followed Doug around the exhibit as he talked about each of the paintings.”

White said Hawkins’ exhibit includes paintings that she had not seen.

“I thought I had seen most of Doug’s MoseT collection but there were several paintings in the exhibition that I had not seen,” she said. “One of those was titled “Jesus on the Cross’ and was painted on an old burlap sack. Doug’s collection of about 100 paintings was in both galleries and the painting, ‘Jesus on the Cross’ was in the entryway of the second gallery. It was very impressive.”

The Johnson Center for the Arts exhibited Hawkins’ Moses Tolliver artwork in May 2013. Morgan Drinkard, curator of that show, attended the opening of ‘As MoseT Would See It’ with Hawkins and White.

“As a former director of the Johnson Center for the Arts, I was proud to have the collection that was once on display at our Center in Troy travel to another museum and be so well received,” Drinkard said. “As a family member, I was thrilled to see Doug get to spend time discussing one of his favorite subjects. When he talks about art, his face lights up and his passion is evident.”

Drinkard said Hawkins was able to share information about Tolliver that gave the audience insight into him as person, not just as an artist.

“Doug talked about how overcoming adversity had contributed to Tolliver’s success as an artist,” Drinkard said. “He explained that if it had not been for the terrible accident at the furniture company, Tolliver would not have become an artist and then we wouldn’t be sitting around admiring his work.

“He talked about how many great people in history had influenced the world or contributed greatly due to having overcome some adversity. He pointed out Helen Keller, being that her birthplace is directly across the street from the museum.”

After the gallery talk, Drinkard said a couple of people brought their own paintings and asked Hawkins if he thought they were authentic MoseT’s.

“One was a watermelon that is a signature item of Tolliver’s and the other piece was from Tolliver’s very early painting career,” Drinkard said. “Doug said they were Moses Tolliver’s artwork.”

Drinkard and White said Hawkins was effective in his gallery talk and his collection of Moses Tolliver’s artwork was well received. The ‘As MoseT Would See It’ exhibit will travel to Wallace College in Hanceville when it closes at the Tennessee Valley Museum of Art May 8.