Allen discusses the redefining of marriage 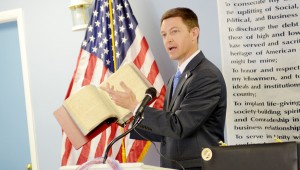 “I watch legislation very closely,” Allen said. Allen discussed bills that are being discussed that concern things such as allowing car tags to have the statement “In God We Trust” on them, repealing the recent rise in driver’s license fees and allowing farmers to purchase unlimited tags for their tractor trailers.

Allen also spoke about his recent proposal to renovate the Rock Building. He described his fund that is used to restore and preserve historical documents and aspects of Pike County. Allen has pledged to dedicate $20 thousand a year for 10 years.

“I’m not trying to put any pressure on anybody,” Allen said. “I think that building is worth restoring for this community. It represents a piece of us.”

The hot topic of the meeting was same-sex marriage.

“We have a conflict of law,” Allen said. “If sexual complimentarity is eliminated as an essential attribute of marriage, then what principle limits marriage to monogamous couples only?

“Once you redefine it, it has no definition,” he said. “If we redefine marriage, nobody can fathom the ripple effects it is going to have through the law.”

Allen describes same-sex marriage as an issue that conflicts with his faith, and he stands by that confidently when addressing the topic.

“I have recognized this as a spiritual battle from the very beginning,” he said.

Since Feb. 6, when Allen announced that he would no longer issue marriage licenses, he has received some discouraging comments; however, he said he has more encouraging words from the people in Pike County.”

“I would hate to guess or give you a theory of where it’s all going in the Supreme Court,” he said. “I don’t know where it’s going, but we’ll see. I’m just one man, but together we can do a lot of things.”

Allen stated that whatever decision is made, it can be handled, and he recognized that both sides of the issue have valid arguments.

“I have faith that it’s going to be okay,” he said.