Troy football in the midst of spring practice, looks forward to second day 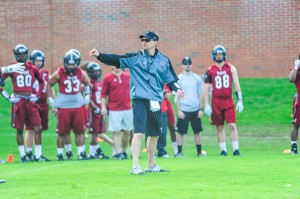 If nothing else, the first day of spring practice for Troy University football under Neal Brown on Tuesday mirrored exactly what the first-year head coach and offensive guru is known for. It was fast.

And fans should come to expect the same from the Trojans come this August, Brown said.

“Yes (that is how we will be playing),” he said. “I think kids are these days are easily distracted. So, we will practice with a lot of pace. That is how we want to play. We want to play really fast, and we would love to lead the country in plays per game. I thought our defense did a great job getting the line together. They flew around. We were simple today on defense, but I thought our guys did a really good job getting to the line.”

Fans and media alike were interested to see how Brown’s air raid offense would look Tuesday, six years after the head coach’s first stint with Troy as offensive coordinator.

But like any up-tempo offense predicated on quick passes, the timing between quarterback and wide receiver left a little to be desired, something Brown expected on the first day of practice.

“I think the offenses are always behind on the defenses, because when you’re throwing the football, it’s predicated on the timing,” Brown said. “Our timing is not great right now, because this is the first time, as coaches, we have been out there with a ball in their hands. So, we have a lot of work to do. I think Brandon (Silvers) at the end there really threw a couple of good balls.”

The general consensus among players and coaches headed into spring is that no spot on the roster is guaranteed, even for record-breaking quarterback Brandon Silvers.

“Every spring semester, I’m always going to compete no matter who I’m going up against,” Silvers said. “I’m going to take it just like I did last spring semester. I have to win the job again, nothing will be handed to me.”

After a day off on Wednesday, the Trojans will return to the field for a 5 p.m. practice Thursday for their second spring practice of the season.

As Troy moves further into spring, players are working to master Brown’s new offense, one that is slightly more complex than the offenses in previous seasons under Larry Blakeney.

“It (The previous offense) was less complex,” Troy running back Brandon Burks said. “Last year, we understood what we were doing. Now, we have to know numbers, signals, the play itself, what you’re doing and what the next guy is doing. Right now, we are working on figuring it out. We all have new adjustments to make and we’re working on it.”

Defensively, the Trojans are seeing a makeover as well.

“They made it really easy for us,” Roberts said. “We have been in the meeting rooms getting the front set, and all the defensive checks right. Obviously, there is a difference when you’re going out there full speed for the first time in the spring, but I think we adjusted to it well. There were a few times we weren’t lined up right, but you expect that on the first day. Overall, we adapted very well and everyone is picking it up very quick.”

And as Troy awaits day two of spring practice, Brown has one goal that takes priority over all else, and that is competition.

The coach expects his team to compete with each other heading into the fall in an attempt to always improve.

But having fun is allowed, too.

“We want to have fun,” Brown said. “Like I said at the opening press conference and I really mean it, people don’t talk about working football, they talk about playing football. I want our guys to put forth great effort, but I also want them to have fun.”