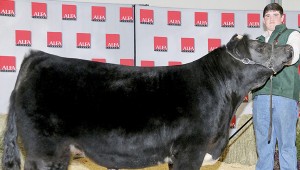 Josh Graham, 15, of Pike County was named reserve champion in the intermediate division of the Showmanship Contest. He said this year’s event was a highlight of his livestock show career.

“These young people are among the best of the best,” Parnell said. “They have been taught responsibility and how to care for animals, and I think that carries over into life. Someday, they will be the leaders in Alabama agriculture, and it’s important we encourage them and help them develop.”

“Today, there are a lot of things tearing families apart,” he said. “This is a good thing for families. They spend time together at the barn taking care of their animals, working together and traveling together.”

“It’s encouraging to see such participation from families across the state.” Hardee said. “Not only is it a wholesome, healthy, family activity, but the children are learning so much more about the spirit of life and appreciation for animals and agriculture. It teaches them the value of the land and what this country is based on.”

Josh Graham, 15, of Pike County was named reserve champion in the intermediate division of the Showmanship Contest. He said this year’s event was a highlight of his livestock show career.

“I’ve shown cattle since I was 7 or 8, and before that I was out at the barn with my sister whenever she started showing in eighth grade,” Graham said. “This has probably been one of the best years I’ve had with these two steers — this is my favorite group of steers.”

Graham said the best part of showing livestock is spending time with friends, but he admits the work ethic it teaches has helped him in school.

“You learn responsibility from showing cattle,” said Graham, who’s a student at Pike Liberal Arts  School in Troy. “Without showing cattle, I wouldn’t have as high grades as I have or been as hard working an athlete as I am. When you show livestock, you wake up, and you’re working with your animals. When you get home from school, you’re working with your animals — to make sure they’re in tip-top shape.”

The judge for the Showmanship Contest was Dr. Doug Parrett, professor emeritus at the University of Illinois, where he served as a cattle specialist. Parrett has judged livestock shows in Australia and South America, but he said he likes judging junior shows because he gets to work with outstanding young people.

“After 40 years in education, I truly believe young people are our future,” Parrett said. “Judging junior shows makes me feel good about that future.”

The Alabama Junior Beef Expo was held in conjunction with the Southeastern Livestock Exposition and included three days of activities including the State Steer Show, Rookie Showmanship and Heifer Show.