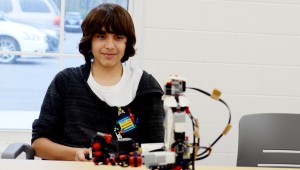 Douglas Topolse, an eighth-grader at Charles Henderson Middle School, designed and built a fully-functional robot for a school project. Topolse has built between around 100 robots in his lifetime and plans to pursue an engineering career. 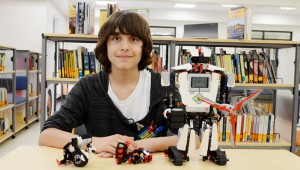 Douglas Topolse, an eighth-grader at Charles Henderson Middle School, designed and built a fully-functional robot for a school project. Topolse has built between around 100 robots in his lifetime and plans to pursue an engineering career.

“The classes that you go to don’t really determine who you are or what you’re going to be,” he said. “Take me for instance. You may see me in all advanced classes, and I may grow up to be some brilliant inventor living in space or something, but what about the guy in the regular classes? He could turn out to be the president.”

While Topolse excels in his advanced classes, he continues to excel outside of the classroom. In his spare time, he builds robots that are fully functional.

“It’s always been my dream to be an engineer,” he said. “My family is made up of engineers. From the youngest age I can remember, I remember building stuff. That’s what my mom got me into. My very first birthday, my grandfather got me a Lego set, and I just started building.”

Playing with Legos helped Topolse in his most recent world history class project. His teacher, classmates and even other staff members at CHMS were awed by his creation. His robot moves on its own, shoots pellets and the shooting claw can be removed and switched with a propeller.

“It’s a simple design when you think about it,” he said. “Everything is just clipped onto the base. I spent the most time on the legs.”

This isn’t Topolse’s first robot rodeo. He said that he has built up to 100 robots. Most of his creations are different from his newest robot. Usually each robot has a specific task. For example, one of his robots at home can turn his light on in his bedroom.

Topolse has a notebook full of ideas for future creations, but has not yet begun to construct them. Maybe someday he will bring those ideas to life.

Although his robot was a unique creation that he build on his own, it is still a school project and will be graded.

Once the project is graded, Topolse plans to take the robot apart to see if he can make something new from it. The ideas and creations just keep coming.