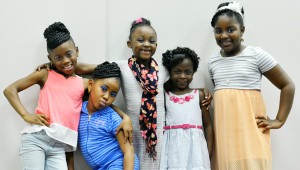 This year Runway of Hope is on track to raise $5,000 for Children’s of Alabama, according to Angie Sherrill, the hospital’s community outreach coordinator.

The Runway of Hope fashion show held Saturday was the main event of local fundraising efforts coordinated by Chelsey Holland.

“More than $3,700 was raised through the fashion show tickets and sponsorships,” Sherrill said. “After all the sponsor events at the restaurants and T-shirt sales, we are on track to raise right around $5,000.

“We are thrilled with the turnout. We are very appreciative of the support of our communities to the children. Every dollar donated touches a child’s life. The money stays in our state, helping our children.” According to hospital statistics, the facility received 888 visits and cases from Pike County in 2014.

Holland said she was happy with this year’s Runway of Hope event.

“This is the biggest crowd I have had,” she said. “I have people not only from Pike County but also from nearby area such as Dothan, Elba and Montgomery.”

Holland said one thing she wanted to improve on the show was to have more models.

“I have 42 for this year, but I want 60,” she said. “Compared to last year, we are better prepared, but with more models, I wouldn’t have to run and rush so much. I would be more organized.”

The models for the show are volunteers, contributing their efforts for the cause.

“I volunteer because I want to help out anyway I can,” said Chasidee Moultry, a model for the show. “This is a great cause to help the children in need.”

Santa Fe Cattle Company, Milky Moo’s and Chick-fil-A are holding events on given night to donate process to Holland’s fundraiser

Milky Moo’s will be holding their fundraiser in support of Runway of Hope and Children’s of Alabama on April 10, from 2 p.m. to 5 p.m.