THE MAGIC OF MOSES: Dr. Doug Hawkins features his “MoseT” work in museum 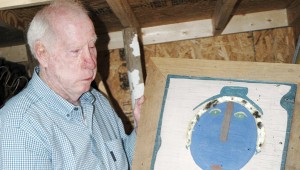 Dr. Doug Hawkins will give a gallery talk at the Tennessee Valley Museum of Art Sunday. Hawkins’ Moses Tolliver folk art collection includes Tolliver’s crutches, which are signed, and his walker. 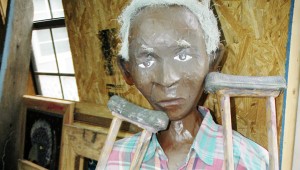 Dr. Doug Hawkins will give a gallery talk at the Tennessee Valley Museum of Art Sunday. Hawkins’ Moses Tolliver folk art collection includes Tolliver’s crutches, which are signed, and his walker.

The painting of the swayback horse by nationally acclaimed folk artist Moses Tolliver hangs hap hazardously in the makeshift studio of Dr. Doug Hawkins of Troy.

Hawkins is an avid collector of folk art, especially that of Alabama folk artists and especially the artwork of Moses Tolliver. With 200 or more paintings by “MoseT” in his collection, some of the paintings are left hanging while others go on the road.

About half of Hawkins’ Moses Tolliver paintings traveled to Tuscumbia this week to be exhibited at the Tennessee Valley Museum of Art through May 8.

Deciding which paintings would go and which would stay was a hard decision.

“I have a few favorites but just a few. I like all of Mose T’s paintings because they all tell a story — MoseT’s story,” Hawkins said. “We were friends for a long time. I admire MoseT’s artwork, and I admired the man.”

Tolliver was born the 12th child of sharecroppers in the Pike Road area. His family never lived even close to the fringes of affluence. Life was simple, and life was hard.

“When MoseT got old enough to work, he had several jobs in and around Montgomery,” Hawkins said. “Back in the late 1960s, he was working at a marble company. A load of marble fell on him when he was sweeping the floor. His legs were injured, and he was crippled for the rest of his life. It was a real credit to MoseT that he took that adversity and found a way to do something remarkable with his life.”

When Tolliver died in 2006, the New York Times ran his death on the front page. “Mose Tolliver, Folk Painter of Outsider Art, Is Dead.”

“How many people have gotten that kind of recognition?” Hawkins said.

But Hawkins said the folk painter he knew was not a pompous man. There was nothing pretentious about Moses Tolliver.

“When he was injured, he taught himself to paint. Painting was something he could do to pass the time and make a little money,” Hawkins said. “Because of the injury to his legs, he could not stand. I visited him at his house in Montgomery many times, and I never saw him stand. He always sat on the bed and that’s where he painted. In his self portraits, he always depicted himself on crutches.”

Tolliver’s crutches and his walker are a part of Hawkins’ folk art collection.

MoseT painted with house paint, and his canvases were cast off materials including plywood, Masonite, boxes and furniture. He used the tab rings from soft drink and beer cans as hangers. He painted borders around the edges of his panels as frames for his artwork.

“MoseT painted want he saw, and what he saw was not always what other people saw,” Hawkins said. “He was, as outsider artist usually are, uneducated — uneducated in art. He depicted things as he saw them without being restricted by ‘education.’”

The way Tolliver saw things and the way he could interpret the things he saw with smears of paint were unique to the outsider from Alabama.

When he painted watermelons, they were lacking in dimension. Tolliver’s red, seed-filled fruit of the South was as flat as a pancake but the paintings sold like hotcakes.

“Folk art had really started to take off and Moses Tolliver’s art began to be noticed,” Hawkins said. “Not as much by people here in Alabama but from other states.

“I was up there many times when people would come in from New York, California or New Jersey to buy MoseT’s artwork. They would bring tape recorders and record him. It was amazing. He was known all over the United States.”

Anything that had the MoseT signature was in great demand and it continues to be.

“There’s just something magical about MoseT’s paintings,” Hawkins said. “I’m glad I got to know him and that I could call him a friend.”